What the World Cup Means for Qatar 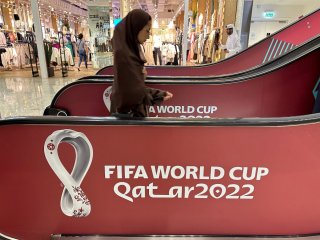 The twenty-nine-day FIFA World Cup tournament, which kicks off on November 20, is expected to attract more than 1.2 million visitors. The FIFA Tournament Time Demand Model forecasts that over 1.7 million people could visit Qatar during the tournament, with approximately 500,000 visitors in the country on the busiest days. Many millions more will get better acquainted with the country through coverage in print media and broadcasts, and from social media posts that will emerge from fans, teams, and journalists staying in Qatar. Estimates suggest that Qatar is spending a massive $200 billion in the lead-up to the World Cup.

Hosting the World Cup is part of the Qatar National Vision 2030 (QNV 2030), a government initiative to transform Qatar into a global society and provide a higher standard of living. The national development plans associated with QNV 2030 include projects directly tied to the World Cup and are intended to promote post-tournament sustainability. Qatar has been building up the necessary infrastructure to accommodate an estimated 1.2 million visitors during the month-long event, a figure that amounts to nearly half of the country’s current population. In addition to building state-of-the-art stadiums, Qatar has introduced a modern metro system, expanded its airport, and constructed new districts within the capital city, Doha.

Qatar’s hope for the World Cup

Qatar’s economy is dominated by hydrocarbon exports. It has the world’s third-largest natural gas reserves and is one of the top oil producers. While natural resources have significantly contributed to Qatar’s prosperity, the market forces that dominate hydrocarbon exports also result in revenue volatility. Consequently, the country aims to grow its non-energy economy, with ambitions to become a regional business and tourism hub. Hosting the World Cup is key to realizing these ambitions. Between 2013 and 2018, the hydrocarbon share of Qatar’s GDP decreased from 55 percent to 39 percent, reflecting, in part, elevated public capital expenditure linked to World Cup preparations. The tournament has supported developments in critical non-energy sectors, and their sustained growth will be a priority for Qatar after the World Cup concludes.

In June 2017, a coalition of Arab countries imposed an economic and diplomatic blockade on Qatar. As a result, the country’s Foreign Direct Investment (FDI) inflows plummeted from nearly $1 billion in 2017 to negative $2.8 billion in 2019. Hosting the World Cup could precipitate a strong rebound in FDI. In 2018, Qatar laid the groundwork by allowing foreign investors to own 100 percent of capital in all sectors to facilitate FDI inflows, eliminating the previous limit of 49 percent foreign ownership. And in 2020, Qatar introduced a public-private partnership law that allows investors to co-own infrastructure assets developed under long-term concessions. The hope is that investors will be attracted to Qatar’s World Cup-related infrastructure developments, economic growth, and more attractive international profile.

In January 2021, countries in the Gulf Cooperation Council (GCC) signed the Al Ula declaration, lifting the embargo. While FDI inflows have remained stagnant, Qatar still anticipates becoming an investment hub. The state recently ranked twenty-fourth in the 2022 Kearney FDI Confidence Index, the first year the country made it on the list, due to investor enthusiasm over its market liberalization efforts and World Cup-driven growth.

The Risks of the World Cup

Despite the potential benefits of hosting the World Cup, major international sporting events provide notoriously poor returns on investment for host nations. Forecasts indicate that Qatar's economy will grow by 3.4 percent in 2022 and 2023, thanks to the World Cup boost, but then slow down to 1.7 percent by 2024.

Despite these concerns, the state strategically erected infrastructure to benefit the economy beyond the World Cup. Qatar’s continued investment in modernizing its infrastructure is likely to expand transportation, commercial, and economic initiatives.

Qatar is set to advance its soft power, influence redefinition, prestige, status, infrastructure, and foreign policy goals. The country will benefit economically from the World Cup. Qatar expects that the event will add $17 billion to its economy. Other estimates suggest Qatar’s growth domestic product (GDP) growth will generate a $4 billion revenue opportunity from tourist spending in the Middle East. Qatar News Agency recently reported that direct financial revenues from the World Cup are predicted to be $2.2 billion, while long-term economic revenues from 2022 to 2035 are estimated to be $2.7 billion, with strong tourism revenues expected to flourish during the World Cup and beyond. Data continue to point to strong non-oil and gas growth in Q1-2022, with the headline Purchasing Managers’ Index (PMI) averaging 60.2. This reflects a sharp expansion in business activity as well as new work, with the expectation that this will continue as the country prepares to host the World Cup.

Qatar aims to transform World Cup infrastructure into new communities, schools, and hospitals as well as springboards for tourism in-flows. The QNV 2030 envisions a diversified economy in which the private sector plays a prominent role and includes a project pipeline worth some $200 billion. Tourism got a big fillip from large investments in transport and urban infrastructure, such as the Hamad International Airport which opened in 2014, spawning new hotels, resorts, malls, and conference centers.

FIFA has estimated that about 3 billion people will watch the World Cup, and about 40 million people could seek to visit Qatar after the end of the event. Some 3 million tourists are expected to visit Qatar in 2023. Qatar faces a rental demand shift because of the country’s imminent hosting of the World Cup. Doha recorded an uplift of 23 percent in average rental unit pricing and Al Khor witnessed a 38 percent price rise over the same period. Price hikes are expected to be temporary, and a slight decrease in demand is forecasted for next year. Sale demands are attributed to Qatar’s new foreign property ownership, and to investment laws, as well as an increase in the areas that foreigners are now allowed to invest in within Qatar.

Qatar’s government is aware of the risk of Covid-19 and is working hard to ensure the safety of citizens and residents, as well as visitors, from any health hazards. Qatar successfully conducted the largest vaccination program in the country’s history. Recent updates to the country’s Covid-19 travel and return policy will help attract more visitors in the lead-up to the World Cup, further boosting Qatar’s tourism sector.

On September 4, Qatar removed the list of countries subject to Covid-19 ‘Red Health Measures’ and quarantine requirements for all travelers arriving from abroad. However, people who test positive for Covid-19 are required to undergo isolation and quarantine.

Globally, all the current indicators show that Qatar is moving to normal life since the end of 2019. Leisure and business travel are back.