When Dealing With the Taliban, Remember That Central Asia Matters 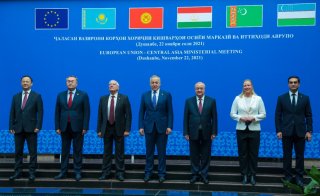 One year after the Taliban takeover of Afghanistan, the international community is still facing enormous challenges in dealing with the new reality in Central Asia. The withdrawal of international military forces, and the evacuation of only a small number of the Afghans who previously collaborated with them, considerably damaged the reputation of the United States and its Western allies. The chaos of the evacuation shocked millions of people around the world and Taliban rule has not brought long-expected peace, sustainable development, and prosperity.

The Taliban cannot be blamed for all the current problems facing Afghanistan given that they inherited an underdeveloped state with high rates of poverty, an over-dependence on foreign aid, and an inefficient governing apparatus. The Taliban could improve the internal security situation but it is encountering substantial problems in governing effectively. The lack of an inclusive government and respect for the rights of women are the largest disagreements between the Taliban and the majority of the international community, which so far has not officially recognized the Taliban as the legitimate government of Afghanistan.

To learn from its past experience of military and political involvement in Afghanistan, Western countries should focus on the following lessons:

First, nation-building should be an internal process largely unaffected by foreign intervention. Afghanistan has continually proven that there is no “blueprint approach” that works and externally orchestrated reforms are fragile. There are no ready solutions for conflict resolution and post-conflict reconstruction. Some general principles and approaches for supporting countries after the end of conflicts still apply but each case requires attention to the importance of local communities taking the lead.

Second, building a highly centralized government under the leadership of strongmen did not work. Afghanistan has a historic tradition of decentralized administration and cannot admit the establishment of personalist regimes. Oddly, the United States and its allies decided to neglect their own principles and commitment to democratic procedures. From 2001-2021, Afghanistan’s presidents were legitimized under the direct coordination and interference of external actors. Despite Kabul’s efforts to consolidate power, the central government was predominantly perceived as being manipulated by the West and lacking the necessary internal support to implement post-conflict reconciliation and development policies. This experiment in Afghanistan clearly demonstrated that an over-centralized presidential model does not guarantee security and stability.

Third, the West was ignorant of how regional countries could elaborate strategies on post-conflict reconstruction in Afghanistan. The future of Afghanistan cannot be considered and assembled without significant support from its neighbors. For various reasons, the United States avoided or minimized its cooperation with several regional countries on Afghanistan issues. Countries such as Pakistan were mainly used as transit routes and to host U.S. and Western military infrastructure essential for operations in Afghanistan. All major international gatherings discussing Afghanistan happened in Europe, the United States, and Japan. All are very far from the region and have a limited understanding of local traditions, context, and history. The concerns and proposals of states next to Afghanistan were barely considered as policy options by the United States and its allies.

The Biden administration is willing to engage with Afghanistan in a limited manner. However, questions remain on how to deal with the Taliban’s tough ideological approach to many policy issues. There is now an ongoing debate on whether the Taliban should be recognized by the international community. The Taliban have faced difficulties in establishing their credibility to merit cooperation with other states. What can the Biden administration do to improve the security situation in Afghanistan?

First, there is a strong lack of trust between the Taliban and the United States. Conducting any substantive negotiations under such circumstances will not be effective. Especially after the U.S. drone strike against Al Qaeda leader Ayman al-Zawahiri, there are many open questions about the credibility and honesty of the Taliban. However, collaboration on a limited number of issues important to the United States and its regional partners is critical. Drug and illicit arms trafficking, transborder threats, and border security are pressing problems that cannot be solved without cooperating with the Taliban.

Second, it is essential for the United States and the West to keep supporting and cooperating closely with Afghanistan’s neighbors. Despite regular exchanges between regional countries and the West, there are still many gaps in mutual understanding. Promoting development and prosperity in the region requires improving connectivity. Western countries have already found ways to regularly send humanitarian support to Afghanistan while not violating sanctions against the Taliban. Therefore, funding connectivity projects in Central Asia would invest in its security, independence, and resilience.

The main attention of the United States and allies in the international coalition should be given to the problem of socio-economic reconstruction and infrastructure development within Afghanistan. Improving the living standards of the Afghan people would help support U.S. policy, reduce the Taliban’s influence, and decrease interethnic struggles. Close cooperation with regional countries would ease the burden of interacting with the Taliban. No one wants to see a new civil war in Afghanistan and the United States has an interest in working to make sure that doesn’t happen.