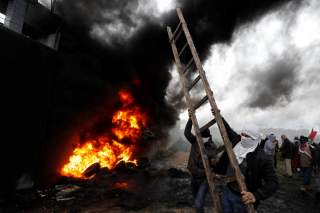 The Cold War concept of containment has experienced a revival among some commentators who would like to apply it to the Middle East. The concept’s apparent attractions include a respected George Kennan pedigree, an association with what is considered a “win” of the Cold War, and the promise of long-term success even in the absence of any immediately visible positive results. Steven Cook, a senior fellow at the Council on Foreign Relations, labels containment as the “most realistic option” for dealing with Iran. Rep. Mark Green (R-TN) also is focused on Iran but wants to make containment the foundation for U.S. policy toward the entire Middle East.

Green’s version of containment is heavy on confrontation, military buildups, and the imposition of maximum costs on the adversary. “Interestingly enough,” Green says in applying this idea to the Middle East, “it would appear to be the current Trump Doctrine” of maximum pressure against Iran. Green disregards how that doctrine has been a failure on every count by making the Iran problem worse than before in terms of Iran’s nuclear activity, destructive actions within the region, and the dominance of hardliners in Tehran.

Green’s interpretation of the Cold War dismisses U.S.-Soviet détente—the considerable accomplishments in the 1970s of Richard Nixon and Henry Kissinger—as not worthy of consideration. He says nothing about the benefits of arms control in warding off the risk of nuclear war, nor anything about how Nixon and Kissinger skillfully used diplomacy within the context of containment to advance U.S. interests in other ways. Indeed, Green seems to view such diplomacy as an alternative to, rather than a tool of, containment. That’s certainly not the way Kennan viewed containment.

Green dismisses détente because it “did little to curb Soviet aggression and ultimately ended with Ronald Reagan’s response to the Soviet invasion of Afghanistan.” If events in Afghanistan in the 1970s and 1980s are to be his only example, then it should be noted that the Soviet military intervention in December 1979 said little or nothing about any wider pattern of Soviet aggression and instead was a reluctant attempt to shore up an existing Communist regime in Afghanistan, which was eroding under the ineffective leadership of Hafizullah Amin amid a growing insurgency.

Green explicitly invokes Ronald Reagan as his model and describes a Reagan Doctrine as “a strategy of containment, confrontation and ‘roll back’ that created an economic struggle with which the communist system could not compete.” Again there is conceptual confusion. Rollback, which was most identified with John Foster Dulles during an earlier phase of the Cold War, was an alternative to containment, not a feature of it. Green fails to describe Reagan’s willingness to engage and negotiate with the Soviet regime—the then-existing regime, not some post-regime-change replacement of it. That engagement centered on arms control, and in this and other respects was little different from the détente of the 1970s. Reagan was one of three U.S. presidents who made the abolition of nuclear weapons an explicit goal. The other two were John Kennedy and Barack Obama.

Central to Kennan’s concept of containment was that the Soviet system would eventually die from its own internal contradictions, not from any U.S. efforts at rollback. And notwithstanding what we now know was the political fate of Reagan’s interlocutor Mikhail Gorbachev, Gorbachev embarked both on engagement with the United States and on his internal reforms with the objective not of overturning the Soviet system but rather of preserving it.

Green’s distorted recollection of the Cold War is directly related in several respects to his misapplication of the idea of containment to the Middle East. One respect concerns the notion of an adversary as a self-motivated source of aggression and disruption, rather than as an entity whose policies consist in large part of reactions to events (such as insurrection in Afghanistan) and to what other states are doing to it. This notion provides a flawed picture of Soviet behavior, and it certainly is a mistaken description of present-day Iran. Cook lapses into this error too by describing containment as a response to Iran’s “irredentist” approach to its region, which, as Daniel Larison points out, is an inappropriate label for what Iran has been doing in the Middle East. Tehran’s regional policies are in very large part reactive, most notably in how its salient military operations over the past several months have clearly been direct responses to the Trump administration’s use of both economic and kinetic means to inflict pain on Iran.

The absence of a feasible and constructive role for diplomacy in Green’s mistaken view of containment during the Cold War is reflected in a similar absence of it in the Trump administration’s ineffective policies toward Iran. Donald Trump probably would like a deal with Tehran but his administration’s policy toward Iran is defined more by Secretary of State Mike Pompeo’s extreme list of demands that amount to Iran rolling over and playing dead. These demands are very unlikely to be declared met with anything less than regime change in Tehran.

Reagan also had hardliners in his administration, such as William Casey and Caspar Weinberger, who seemed content to wage the Cold War forever. But Reagan’s different approach prevailed, thanks in large part to his secretary of state, George Shultz, who understood where Reagan wanted to go in terms of engagement and arms control. Mike Pompeo is no George Shultz.

Green makes political science-imbued references to bipolarity and multipolarity and to what some real political scientists have had to say about such things. Most observers would agree that the Cold War era was indeed one of bipolarity, but even here an undifferentiated view of two monolithic camps fails to capture what succeeded and what failed in Cold War policies. Nixon’s successful triangular great power diplomacy, featuring the opening to China, exploited the fact that the Communist camp was not monolithic. The tragedy of the Vietnam War, which Green mentions in passing, reflects a failure to recognize that fact.

Although the global power structure of the Cold War era was predominantly bipolar, the Middle East of today is not. Contrary to Green’s assertion, power and interests in that region are not organized neatly into an Iran-led Shia crescent versus an alliance of Israel and some Sunni Arab states. Painting such a picture is partly an American habit of dividing the world into good guys and bad guys and partly a wish among those who want to attribute all the ills of the region to Iran.

The regional reality is far more complex. Cross-cutting conflicts that do not correspond to the oversimplified bipolar picture are significant enough to motivate regimes and rile streets. Those conflicts manifest themselves in, among other things, the Gulf Arab ostracism of Qatar, the external interventions in the current war in Libya, and the continued resonance of the Israeli-Palestinian dispute, as reflected in the Arab League’s recent unanimous rejection of the Trump administration’s “peace plan” on the subject.

The tenuousness of Green’s notion of Middle Eastern bipolarity is reflected in his reference to assassinated Iranian general Qasem Soleimani as “mastermind of the forces which created the bipolarity.” Any supposed international power structure that owes its existence to a single mastermind is not an international power structure at all. Even Joseph Stalin, dictator of the Soviet Union for decades, did not “create” the bipolarity of the Cold War era.

Aligning the United States on one side of Green’s presumed bipolar division is unwise not only because that division does not reflect regional reality but also because the division itself does not separate what’s good from what’s bad from the standpoint of U.S. interests. That is true as measured by which regimes are indulging in destabilizing behavior, including the use of military force, outside their own boundaries. It also is true as measured by internal considerations such as democracy, treatment of subordinate ethnic groups, and other aspects of human and political rights. And the United States will never advance its interests by taking sides in religious divisions, such as by acting as if it likes Sunnis more than Shiites.

A final and glaring problem with trying to apply the Cold War experience, as it relates to containment or anything else, to current policy issues in the Middle East concerns the magnitude and nature of the Cold War. It was an ideologically defined struggle for global dominance between two nuclear-armed superpowers. Nothing remotely resembling that characterizes the Middle East of today, especially with regard to anything that impinges on or poses a threat to U.S. interests. Iran is a mid-size nation-state that is a significant player in its own region but not a global factor militarily or ideologically. To treat it as a second coming of the USSR and make it a fixation of U.S. policy is an insult to the United States’ global stature and significance.