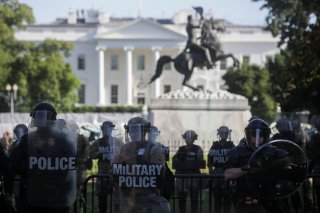 President Donald Trump, supported by Sen. Tom Cotton (R-Ark.), raised a major controversy in early June by suggesting that active-duty troops be used to impose order in the streets of American cities. The Trump administration made moves toward implementing that suggestion, including dispatching part of the Army’s 82nd Airborne Division to locations just outside Washington, DC. The response in opposition by former senior military officers—with former defense secretary James Mattis’s statement being the most eloquent—has been heartfelt and appropriate.

As part of Trump’s guns-and-toughness posturing, the president has conflated the notion of Army troops confronting American citizens in American cities with another favorite part of that posturing, which is the “gun rights” issue invoking the Second Amendment to the Constitution. Trump made that conflation explicit in the Rose Garden speech that he delivered shortly before Attorney General William Barr ordered the use of stun grenades and tear gas to clear a path to Trump’s photo-op at a church. In the speech, Trump stated, “I am mobilizing all available federal resources—civilian and military—to stop the rioting and looting, to end the destruction and arson, and to protect the rights of law-abiding Americans, including your Second Amendment rights.”

Trump’s further rhetoric on this assortment of issues has been contradictory. He has shown no fondness for public order when egging on protestors who have resisted the authority of governors while threatening violence and brandishing assault rifles in state capitol buildings. Moreover, invoking the Second Amendment in the same breath as threatening to put active-duty military personnel into the streets involves another contradiction, as a matter of law and history.

The Second Amendment is about well-regulated militias. It says in the first line of the amendment that a “well-regulated Militia” is “necessary to the security of a free State.” For over two centuries the courts did not regard it as limiting the power of states and localities to enact laws regulating individual ownership of firearms. Then, in 2008, lobbying spearheaded by the National Rifle Association finally got five Supreme Court justices in Heller v. District of Columbia to abandon any semblance of original intent and construe the Second Amendment as a basis for striking down gun control laws that have nothing to do with militias, let alone well-regulated ones.

When the Bill of Rights, of which the Second Amendment is a part, was written, militias were in good odor among Americans of all political persuasions. Militias, after all, deserved much of the credit for standing up to the British Redcoats during the American Revolution.

After independence, militias became an important part of two over-arching political issues. One was the issue of how much power the new federal government would have relative to the authority of the states. Enactment of the Bill of Rights, including the Second Amendment, was a concession by the federalists to the anti-federalists who considered it vital to restrict the powers of the federal government and keep it out of the business of the states, including the business of preserving local order.

This subject was closely related to the second big and relevant issue, which was a general antipathy to standing armies. As much as militias were in good odor among Americans of that day, a full-time military under the control of a central government was in bad odor. (After the almost complete demobilization of the Continental Army at the end of the Revolution, this attitude was reflected in U.S. policy until increased tensions in the 1790s, first with Britain and then with France, led to the restoration of a small standing military.) The strong pro-militia statement the Second Amendment makes was a statement against any federal army butting into the states’ business. The “right to bear arms” was made universal out of a fear that the federal government might butt into the states’ business not only through the deployment of a federal army but also by limiting the size of a state’s militia. Baron von Steuben, the Prussian officer who became George Washington’s inspector general during the Revolution, had suggested just such a limitation.

In short, the Second Amendment embodies opposition to the very use of federal troops that Donald Trump and Tom Cotton are talking about. The authors and early champions of the amendment would be appalled to hear it invoked by those arguing that a federal army should be used to corral and coerce American citizens in the streets of American cities.