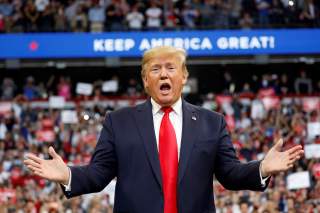 The roles of national security professionals who spend careers in government have gotten increased attention lately, mainly because some of their number have been thrust into an uncomfortable spotlight because of the possible impeachment of Donald Trump. The attention has not improved public understanding of the missions and commitment of such officials. The politics surrounding the impeachment issue, unfortunately, have made public misunderstanding even worse.

Better understanding starts with the basic reasons the nation has such professional services, which include the uniformed military, the foreign service, intelligence officers and other civilian career officials in certain agencies and departments working on national security. The existence of those services reflects the following principles.

One is that the most important and fundamental national security interests are continuous and do not change from one election outcome to another. These include the safety, well-being, and prosperity of the American people. They include a continuing interest in U.S. foreign relations being conducted with truth, knowledge, and integrity. Such things are not artifacts of specific ideologies, grand strategies, party platforms, or policy lines. Although political competition plays on differences and thus understates the continuity, most of the day-to-day conduct of America’s relations with the world is not part of that political play.

A second principle is that continuity in personnel is important. It preserves knowledge. It preserves working relationships, both inside the U.S. government and with other governments.  It minimizes disruption in work patterns. One indication of the importance of this factor is how much disruption and re-inventing of wheels take place when administrations change and the large politically-appointed layer that overlays the professional services is replaced.  Imagine how much more disruption there would be if such politically driven replacement reached even farther down in the government.

A third principle is that expertise and experience matter. The nation is best served when it is served by the people who are the most expert and experienced at the specific functions that the nation calls on them to perform. There tends to be somewhat more understanding of this principle with regard to the military than with the other professional services. It is not controversial to suggest that when a U.S. Army division is sent into combat, it is best if the general commanding it was not selected on the basis of his political views.  (There were political generals in the Civil War, and many of them did not work out well.) The understanding is less with diplomacy, as reflected in the prevalence of inexperienced nonprofessional ambassadors, a pattern that the Trump administration has taken to new depths. The late Malcolm Toon, a distinguished diplomat who was U.S. ambassador to the Soviet Union in the late 1970s, told of meeting an admiral who said he wanted to be an ambassador when he retired from the Navy—to which Toon replied that when he retired from the foreign service he wanted to command an aircraft carrier.

A fourth principle is that reconciling the previous three principles with political accountability in a representative democracy requires career services imbued with a strict and well-defined ethic.  That ethic includes a dedication to the national interest without injecting partisan purposes or an officer’s personal political views in the course of performing official duties. It includes giving the best-unvarnished advice to political superiors in private while refraining from discordant statements in public. It requires recognition that elected political leaders and not unelected officials have the right and the duty to make policy. But it also means that ultimate loyalty is to the nation and the Constitution and not to anyone set of leaders—as reflected in the oaths that officers swear upon entering service.

This ethic goes a long way in determining who populates the professional services involved in national security. Self-selection is critical. The sorts of people who gravitate to such careers are not only interested in the specific function they perform—be it ground combat as an infantry officer, making sense of incomplete information as an intelligence analyst, or something else—but also are more comfortable than others with the constraints of the professional ethic.  Anyone in a service who becomes uncomfortable with those constraints and yearns to be more outspoken and active as a policy advocate is likely to self-select out of the service and do something else, such as joining a political campaign or advocacy group or even running for office themselves.

Several aspects of the current political atmosphere exacerbate public misunderstanding of all of this. First are the smears, from Trump himself and from those who support him no matter what, against career officers who report truths relevant to Trump’s misconduct.  The smears intended to discredit officers such as Ambassador William Taylor and Lieutenant Colonel Alexander Vindman have been ruthless and despicable.  The smears, like much else uttered by the same smearers, will be believed by a substantial segment of the U.S. population.

Then there are efforts from above, such as in Mike Pompeo’s State Department, to vet and purge career officials as a way of enforcing political loyalty. The objects of such efforts may not become recognizable names in the news such as Taylor and Vindman, but the whole exercise adds to the impression among much of the public that career officials are no less partisan than those in the political stratum.

Another blurred distinction—one relevant to the stricture against serving officials speaking publicly against the policies of their political masters—is between officials on active duty and ones who are retired. The distinction is all-important. Actively serving officers are subject to all the ethical constraints of their profession, including ones relevant to expressing opinions publicly.  Retirees or others who have left the service are private citizens free to exercise fully their First Amendment rights.  And yet the distinction keeps getting blurred, and not just in Trump’s demeaning of former officials who criticize him or his policies. Thus the Washington Post runs an article about “current and former military officials” criticizing Trump’s policy on Syria, in which ominous references are made to “straining” codes of conduct and to Douglas MacArthur’s insubordination against Harry Truman, but with no distinction drawn between the much different circumstances of current officials and former ones.

A broader factor in contributing to the misunderstanding is the hyperpartisanship of the last couple of decades in which, at least from the perspective of parts of the political spectrum, just about everything said or done in the public sphere has a partisan objective (and evidently in the view of some, should have a partisan objective). For those who are immersed especially deeply in this atmosphere, the idea of objective policy analysis or nonpartisan pursuit of a broader national interest is a foreign concept, genuinely difficult for them to understand. Following easily from this lack of understanding is the belief that when a career official speaks or acts in any way inconvenient for President Trump and his supporters, then it must be because the official is motivated by his or her own policy or partisan objectives. From that follows the overall nonsense about a “deep state”.

And no, when Colonel Vindman spoke to the impeachment inquiry about Ukraine being a bulwark against Russian aggression and a source of reformist hope, he was not, as has been suggested, epitomizing the “mindset” of a “foreign policy establishment” that is determined to block efforts by Trump to move foreign policy in a different direction. He was merely stating what has been official U.S. policy toward Ukraine, including the official policy of the current administration. As Taylor described in detail in his statement to the same inquiry, there have been two policy channels, each with its own policy, toward Ukraine: the official one and the Rudy Giuliani one.  Vindman, as a military officer and a National Security Council staffer, was quite properly following the official one. He was not pushing for a policy and is not a member of the “Blob,” which by definition does push policy.

Trump’s antipathy—and thus the antipathy and suspicion of many of his followers—toward career professionals in the national security bureaucracy dates back to the beginning of his administration, when the intelligence community’s unavoidable findings about Russian interference in the 2016 election cast a huge cloud over Trump’s election victory. Trump’s clashes with that bureaucracy will continue as long as he promotes untruths about election interference, the nature of corruption in Ukraine, or any other topic that professionals in the bureaucracy are duty-bound to address in an objective and truthful manner. There will be clashes not because those professionals have a partisan or policy agenda, but because they do not.