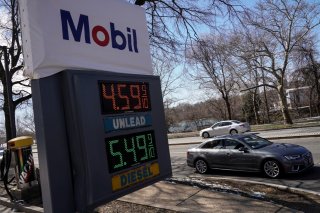 Gas prices have continued to surge in the United States, although one report says that diesel prices have actually decreased.

According to GasBuddy, the average price for gasoline in the United States is now $4.57 a gallon, an eleven-cent week-over-week increase, and the fifth straight week the price has gone up. The report added that the average price of diesel has fallen 1.7 cents, to a still historically high $5.53 per gallon.

“Gasoline prices surged over the last week to new record highs, but have finally started to slow their rise with diesel also finally cooling off,” Patrick De Haan, head of petroleum analysis at GasBuddy, said in the release.

“With more Americans planning to hit the road for Memorial Day this year compared to last, prices will be over $1.50 per gallon higher than last year. Though, prices are appearing to slow down, for now. While the coast isn’t clear yet, and prices will be at their highest Memorial Day level ever, I’m hopeful that we could avoid a dreaded national average of $5 per gallon this year. Whether or not we’re able to depend on Americans cutting demand in the face of sky-high prices.”

AAA, in its own weekly report on Monday, also found that gas prices had either risen or remained flat every day since nearly a month ago, and that new records had been set every day since May 10. The average price, per AAA’s analysis, is now $4.59 a gallon, with the average in all 50 states now above $4 a gallon.

“Gasoline is $1.05 more than it was on February 24, when Russia invaded Ukraine,” Andrew Gross, AAA spokesperson, said in the release. “That sent shock waves through the oil market that have kept oil costs elevated. Domestically, meanwhile, seasonal gas demand is rising as more drivers hit the road, despite the pain they face paying at the pump.”

This week, Energy Secretary Jennifer Granholm testified before Congress and denied that Biden Administration policies were responsible for the rise in gas prices, per Fox News.

"With respect, sir, it is not administration policies that have affected supply and demand,” Secretary Granholm told the Senate Armed Services Committee, in response to questioning from Sen. Josh Hawley (R-MO), who blamed Biden's policies for surging energy prices in his home state.

Granholm went on to cite a survey in which "94% of the oil and gas executives” answered that "administration policies had nothing to do with the increase in price of oil… Coming out of COVID, there was an increase in demand because people were driving again," she said.

"When there was no demand, the prices dropped. That's a basic law of economics,” Granholm added.