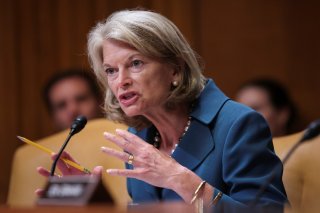 A bipartisan group of senators on Monday introduced legislation that guarantees federal access to abortion, an effort to codify the procedure after the Supreme Court overturned Roe v. Wade, the Washington Post reported.

However, the bill from senators Tim Kaine (D-VA), Lisa Murkowski (R-AK), Kyrsten Sinema (D-AZ), and Susan Collins (R-ME) faces plenty of hurdles in the Senate, where it is unlikely to garner enough support from Republicans.

“After the Supreme Court gutted a woman’s right to make personal health care decisions, Congress must restore that right,” Kaine said in a release.

“That’s why I’ve worked with my colleagues to find common ground on this bipartisan compromise that would do just that. The Reproductive Freedom For All Act would restore the right to abortion and protect access to contraception by enshrining those freedoms into federal legislation,” he continued.

After the Supreme Court’s controversial decision last month to strike down Roe, the ruling gave individual states the authority to set their own abortion policies. Since then, dozens of states have either completely banned abortions or severely restricted access to the procedure.

“Every American should have autonomy over their own health care decisions, and the Supreme Court’s decision in Dobbs has made it imperative for Congress to restore women’s reproductive rights,” Murkowski said in a statement.

“For five decades, reproductive health care decisions were centered with the individual—we cannot go back in time in limiting personal freedoms for women,” she added.

Meanwhile, Sinema asserted that “a woman’s health care decisions should be between her, her family, and her doctor.”

Amid increasing pressure from some Democrats and abortion rights groups, the House of Representatives last month passed legislation that seeks to protect the right to purchase and use contraception without government restrictions.

Sponsored by Rep. Kathy Manning (D-NC), The Right to Contraception Act also affirms a right for healthcare providers to provide contraceptives and allow the Justice Department and entities harmed by contraception restrictions to seek enforcement of the right in court.

The Biden administration has also directly warned pharmacists across the country that they are at risk of violating federal civil rights laws if they decide to deny filling prescriptions that could be used for abortions. Furthermore, the White House told hospitals that they “must” provide abortion services if the life of the mother is at risk, contending that federal law on emergency treatment guidelines preempts state laws in jurisdictions that now prohibit the procedure without any exceptions.

According to a recent Pew Research Center poll, more than 60 percent of Americans believe that abortion should be legal in all or most cases.