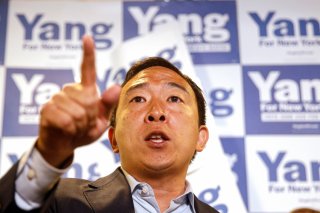 Over the course of the Covid-19 pandemic, Congress has stepped in to approve three much-needed stimulus checks—a $1,200 check in April 2020, $600 in December 2020, and the $1,400 payments given the go-ahead last spring under President Joe Biden’s $1.9 trillion American Rescue Plan.

In recent months, however, there has been more talk surrounding the fact that those government-issued direct payments should be blamed for current high-inflationary pressures that are being felt across the country. In fact, the latest consumer price index (CPI) was found to have surged 8.5 percent in the year through March, hitting the fastest inflation rate since 1981, according to Labor Department data.

But this view is being pushed back on by former Democratic presidential and New York mayoral candidate Andrew Yang, who has long been a strong proponent of universal basic income (UBI). During his presidential campaign, he embraced the idea of giving $1,000 to all American adults on a monthly basis.

“Money in people’s hands for a couple of months last year—in my mind—was a very, very minor factor, in that most of that money has long since been spent and yet you see inflation continue to rise,” Yang told CNBC on the sidelines of the recent Bitcoin Miami conference, adding that before the pandemic and stimulus payments, the chief drivers of inflation were basic necessities such as education, health care, and housing.

Yang also contended that stimulus checks comprised “maybe 17 percent” of all the money issued via the CARES Act. “Where did the other 83 percent of the money go?” he said. “It went to institutions. It went to pipes.”

The current high-inflationary environment, according to Yang, has more to do with too much pent-up demand and not enough inventory. “Everyone is concerned about inflation,” he said. “I’m concerned about the fact that it’s making a lot of Americans’ lives miserable, because it’s a very difficult circumstance when your expenses are climbing, and maybe your income isn’t keeping pace.”

Yang also had high praises for cryptocurrencies, noting that bitcoin is not only an inflation hedge, but it could also help realize his ambitious vision for a widespread rollout of UBI. “The intersection is very significant, because if you’re trying to get buying power in people’s hands, one tool to do so is the U.S. dollar, and I ran for president on making that case, but there’s no reason why it necessarily needs to be in U.S. dollars as opposed to bitcoin, or some other asset class or currency,” he explained.

“You can have municipalities and communities experimenting with local currencies that will help drive people to local small businesses and nonprofits that may not be getting the support that they need right now,” he added.