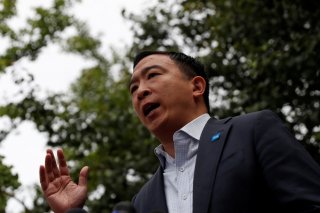 Here's What You Need to Remember: A universal basic income is effectively the same as a monthly stimulus check. Consequently, Yang, Humanity Forward, and other UBI advocates have been among the strongest proponents for a fourth, if not a recurring, stimulus check.

In 2020, New York tech entrepreneur Andrew Yang ran for president. In the crowded field of Democratic contenders, Yang broadly stood out for three reasons: his lack of prior political experience, his refusal to wear a tie, and his advocacy for universal basic income.

Universal basic income, or UBI, is the belief in establishing a basic standard of living by sending money to all Americans with no strings attached. Advocates come from both sides of the political spectrum; some progressives view it as a part of the social safety net, while some libertarians view it as an alternative to bureaucratic, job-killing welfare payments.

As a presidential candidate, Yang was not successful; he dropped out after the New Hampshire primaries and ultimately endorsed Joe Biden, who went on to defeat Donald Trump in the 2020 election. However, after he ended his presidential run, Yang founded “Humanity Forward,” a political action group devoted to advancing universal basic income.

Humanity Forward has been broadly successful in bringing attention to the issue of universal basic income. While UBI has not yet been practiced nationwide, it has been piloted in several American cities – most recently in Oakland, California, where the proposal controversially excluded white people from its eligible recipients, although the organizers later backtracked.

Moreover, over the past year, it has not escaped the notice of UBI advocates that cash payments to all Americans with no strings attached have been a part of the COVID-19 response policies of both the Trump and Biden administrations – namely, in the form of three separate stimulus measures, in March and December 2020 and again in March 2021.

A universal basic income is effectively the same as a monthly stimulus check. Consequently, Yang, Humanity Forward, and other UBI advocates have been among the strongest proponents for a fourth, if not a recurring, stimulus check. Humanity Forward’s letter to President Biden has been signed by dozens of Congressional Democrats; roughly 80 have recorded their support for a fourth stimulus measure of some sort, although such a measure seems doomed for defeat in the tightly contested Senate.

Yang is now running for mayor of New York; ostensibly the frontrunner, he is fending off challenges from competitors Eric Adams, Maya Wiley, and Kathryn Garcia. As part of his campaign platform, Yang introduced a basic income proposal for New York, although it is much smaller in scope than his previous UBI proposal. The Democratic primary is scheduled to take place on June 22.