Backing the Child Tax Credit Could Bring Republicans Back Into Power 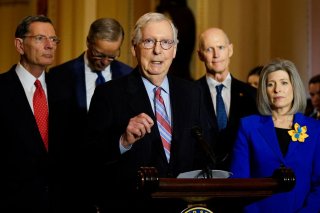 Throughout the saga of the expanded child tax credit, which came into place at the federal level as a result of the American Rescue Plan Act, one thing was clear: Democrats in Congress supported it, and Republicans did not.

When the American Rescue Plan Act passed in 2021, it went through the Senate entirely along party lines and passed the House with all but one Democrat voting yes and every Republican voting no.

When the Build Back Better framework, which would have extended the credit by one year, passed the House last November, every Democrat but one voted for it, while every Republican voted against it. And while that framework died in the Senate before a vote could be taken, most Democrats (with the crucial exception of Sen. Joe Manchin of West Virginia) backed the bill, while the Republicans unanimously opposed it.

In an op-ed piece this week, Mike Shields of News Talk Florida, a former chief of staff for the Republican National Committee, argued that Republicans have an opportunity to “win over suburban moms,” in this year’s midterm elections by embracing the child tax credit. They can simultaneously promise to pass an expanded credit while blaming the Democrats for failing to keep it in place.

“With inflation soaring to 40-year highs thanks to their economic mismanagement, Democrats have once again tried to win over parents with ‘universal’ proposals that supposedly ease the rising cost of living,” Shields writes. “But in chasing endless bureaucracy, they’ve abandoned a program that worked — the monthly Child Tax Credit (CTC). Republicans have an opening here.”

Doing so would allow the GOP, he says, to reclaim the mantle of “family values,” while also appealing to crucial demographics. He notes that a child tax credit was part of the Contract With America, the agenda that the Republicans ran on in the 1994 midterm elections when they captured both houses of Congress, and one part of that agenda that actually became law. They could do the same this year, while also arguing that they are helping to fight inflation.

“Supporting each individual family with the CTC can look completely different. For example, cash can pay for car repairs that enable a parent to commute to work,” Shields writes. “It can cover specialized care for a child with a disability. If a large family has alternative child care options, like tasking an older sister with babysitting, the CTC lets that family keep more of their money for other needs.”