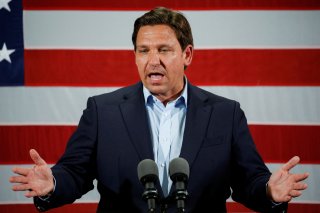 President Joe Biden on Wednesday responded playfully when asked about a potential 2024 Republican primary between former President Donald Trump and Florida Gov. Ron DeSantis, whose landslide victory over Democrat Charlie Crist in Tuesday’s midterm elections will likely set the stage for a White House run, according to a Politico report.

“It’ll be fun watching them take on each other,” Biden said during a news conference in which he reviewed the midterm elections.

The president was also asked whether DeSantis or Trump would make a more formidable opponent, but he did not directly answer that question.

DeSantis has yet to officially announce a 2024 campaign for the nation’s highest office, but Trump has confirmed that he has a “very big announcement” coming within the next week. However, some of the former president’s closest allies are now calling on him to delay his planned announcement due to the Georgia runoff between incumbent Sen. Raphael Warnock (D-GA) and former football star Herschel Walker, which could potentially determine control of the Senate.

Trump, who told reporters on Tuesday that he voted for DeSantis, has already gone on the offensive, calling the Republican governor “Ron DeSanctimonious” at a recent rally. He also told Fox News that DeSantis shouldn’t even consider entering the presidential race.

On Wednesday, Trump posted a rhetorical question on social media that seemingly targeted the Florida governor.

“[S]houldn’t it be said that in 2020, I got 1.1 Million more votes in Florida than Ron D got this year ... Just asking?” Trump wrote on his social-media platform, Truth Social.

Meanwhile, as reported by The Hill, Biden on Wednesday suggested that Trump will “not take power” again if he decides to run in 2024.

When asked how other world leaders should view Trump potentially running for the presidency again, Biden said: “We just have to demonstrate that he will not take power if he does run, making sure he—under legitimate efforts of our Constitution—does not become the next president again.”

As for his own reelection plans, Biden said that he will make an official decision in early 2023.

“I hope Jill and I get a little time to actually sneak away for a week around, between Christmas and Thanksgiving,” he said. “My guess is it will be early next year we make that judgment.”