Is Biden Ready Battle Congress Over the Debt Ceiling? 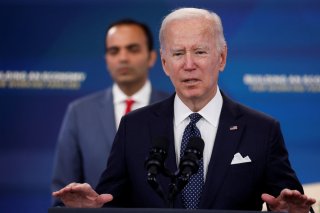 During the Obama administration, especially during the period when Republicans controlled the House, there were several confrontations during which the debt ceiling was used as a political weapon and the Republicans demanded concessions in exchange for agreeing to lift the ceiling.

The debt ceiling has been raised repeatedly, mostly without controversy or even much of a splash, during both the Trump and Biden presidencies. The deficit and spending, as well, have barely been topics in the political fights since President Barack Obama left office.

But with the strong possibility that Republicans win back the House in next month’s midterm elections,  debt ceiling brinksmanship could once again become a regular feature of politics.

Some on the Democratic side have suggested making changes to how the debt ceiling works, and possibly even removing it altogether during the lame-duck session this December.

This week, the president declared his opposition to that idea.

According to Politico, President Joe Biden this week called getting rid of the debt ceiling “irresponsible.”

Roll Call reported that some in Congress have called for a more permanent solution to the possibility of a debt ceiling standoff, including a proposal by Rep. Brendan Boyle (D-PA).

“The only hope of avoiding these potential repercussions is for us to implement a solution more permanent and reliable than the current practice of hastily taking action each time we approach the dollar amount of the debt limit or the expiration of an enacted suspension,” Boyle wrote in a letter to Sen. Chuck Schumer (D-NY) and Rep. Nancy Pelosi (D-CA), the respective leaders of the Senate and House.

Boyle’s suggestion is either to abolish the debt limit altogether or to grant the authority to raise it to the Treasury secretary rather than Congress.

“If the counterintuitive nature of the current debt ceiling process is not reason enough to drive change, then the prospect of Republicans sending our economy into default for political gain should be,” Boyle said in the letter. “Republicans have repeatedly signaled that they are willing and eager to use the debt limit as a bargaining tool if given the opportunity, and we should take them at their word.”

In his remarks last week, the president also vowed not to “yield” to any Republican demands to cut entitlements in exchange for a raising of the debt limit.

Biden also addressed the deficit.  “If Republicans get their way, the deficit is going to soar,” he said. “The tax burden is going to fall on the middle class.”