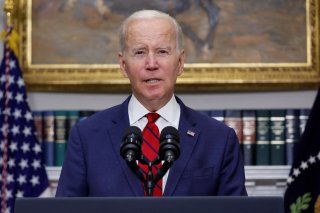 The Biden administration on Monday announced that Mark Frerichs, an American held captive in Afghanistan for more than two years, has been released in a prisoner swap, according to a new Politico report.

Frerichs, a sixty-year-old Navy veteran who worked as a civilian contractor in Afghanistan for more than a decade, was released in exchange for Afghan tribal leader Haji Bashir Noorzai, who had been in prison in the United States on drug trafficking charges for seventeen years.

A senior Biden administration official said that Frerichs is currently with U.S. officials in Doha, Qatar, adding that his health is “stable” and “solid.” Frerichs was able to walk on his own onto the aircraft, a source familiar with the matter said, according to CNN.

“Bringing Mark home has been a top priority for President Biden and his national security team,” the official said.

President Joe Biden said in a statement that “our priority now is to make sure Mark receives a healthy and safe return and is given the space and time he needs to transition back into society.”

Meanwhile, Frerichs’ family praised the president for securing his release.

“There were some folks arguing against the deal that brought Mark home, but President Biden did what was right. He saved the life of an innocent American veteran,” Frerichs’ sister, Charlene Cakora, said in a statement.

“I am so happy to hear that my brother is safe and on his way home to us. Our family has prayed for this each day of the more than thirty-one months he has been a hostage. We never gave up hope that he would survive and come home safely to us,” she continued.

“My administration continues to prioritize the safe return of all Americans who are held hostage or wrongfully detained abroad, and we will not stop until they are reunited with their families,” Biden said in a statement.

“We have much more work to do in many other cases, but Mark’s release demonstrates our enduring commitment. Like our work to free Americans held in Burma, Haiti, Russia, Venezuela, and elsewhere, it is our duty to do all we can to bring our people home,” he added.

On Friday, Biden met separately with the families of Griner and Whelan, who are both held by the Russian government.

Griner, a Houston native who plays professional basketball for the Phoenix Mercury, was sentenced last month to nine years in prison for bringing less than a gram of cannabis oil into Russia. She was also fined 1 million rubles, or roughly $16,500.

Whelan, a corporate security executive from Michigan, was sentenced to sixteen years in a Russian labor camp on espionage charges in 2020.