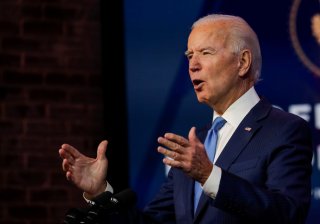 The Build Back Better agenda, which passed the House in December, would have contained several of the White House’s spending priorities, including the continuation of the expanded child tax credit for an additional year. But because the bill died in the Senate last December, the president is pivoting. Part of that includes getting rid of the Build Back Better name.

Reuters reported on Monday that in his State of the Union address Tuesday, President Biden will “shift emphasis away from his Build Back Better spending plan,” focusing instead on “a four-point plan to save the U.S. economy.”

"It's not about the name of the bill,” an administration official told Reuters. "It's about the ideas. It's about lowering costs for families.”

The return of the expanded tax credit does not appear to be part of that plan. The White House’s goals appear to concern reducing inflation and the deficit, while also salvaging some of the spending priorities from Build Back Better.

Biden is expected to also address spending priorities from last year’s bipartisan infrastructure bill, which did pass, while also devoting time in the speech to the situation in Russia and Ukraine.

“President Biden ran for office with a new economic vision: to grow the economy from the bottom up and the middle out, not the top down. On Tuesday, the President will make a strong case that the Biden-Harris economic strategy is producing historic results, and lay out his plan to tackle the economic challenges ahead,” the White House said in a fact sheet released Monday.

The only mention in the fact sheet of the child tax credit is a list of previous accomplishments of the Biden administration, which includes the passage of the American Rescue Plan Act in March 2021.

“The President will make clear that we can lower costs while lowering the deficit by rewarding work, not wealth. He will outline proposals to make sure corporations and the wealthiest Americans pay their fair share, while making clear that no one making under $400,000 a year should see their taxes increased,” the fact sheet said.

The speech will be Biden’s first State of the Union address as president. Ahead of the speech, Congress announced that it was lifting the mask mandate that had been in place since the start of the pandemic. The White House lifted its own mandate earlier this week.