Can Romney's Child Tax Credit Compromise Make It Through Congress? 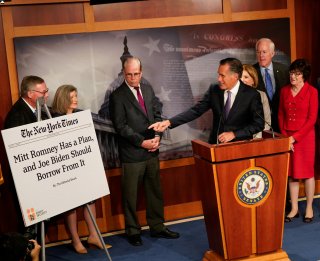 The expanded child tax credit expired at the end of 2021 after it became clear that there wasn’t enough support to pass the Build Back Better package, which would have funded the credit for one more year.

Despite this setback, a number of Democratic senators have continued to push for a continuation of the expanded credit, and some lawmakers have highlighted that the expiration of the credit led to a noticeable increase in child poverty in the first month of 2022. However, as long as Sen. Joe Manchin (D-WV) continues to oppose the credit, it’s unclear how something resembling the Build Back Better version can pass a divided Senate.

One possible way around that barrier is a bipartisan version of the child allowance proposal, which was put forward in early 2020 by Sen. Mitt Romney (R-UT). Earlier this week, NBC News looked at what form such a deal would take.

“His proposal would bring back the direct monthly payments many parents used for six months last year to cover the cost of food, clothing, and child care before Congress let the tax credit expire," NBC reported. “But Romney's form of extra monthly payments would add stringent work requirements, slash programs that aid vulnerable Americans and make significant changes to the tax code.”

Such a deal may be the only way for the child tax credit to survive, although whether it could get enough support from both parties remains an open question. Democratic supporters of the expanded credit have not been receptive to the idea of work requirements. However, Romney did tell NBC that multiple Democratic senators have expressed interest, although he did not name those senators.

“I think momentum is growing quite a bit, and there’s more interest because folks on the right want to do something,” an aide to Romney said. “I think folks on the left are realizing if they don’t do it bipartisan, it’s not going to happen.” While Romney has not officially introduced legislation for the proposal this year, he did introduce a similar proposal in early 2020.

“I’ve spoken with enough Democrats, including Joe Manchin, that insist that that’s essential. And, by the way, a number of Republicans, as well, say that’s absolutely essential—there has to be a work requirement,” Romney said last month during a speech at the American Enterprise Institute.