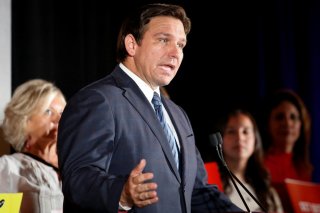 As the death toll soared past 100 in Florida, Gov. Ron DeSantis over the past weekend defended the timing of evacuation orders in hard-hit Lee County ahead of then-Category 4 Hurricane Ian’s landfall, according to a new Politico report.

The Republican governor, seen as a potential presidential candidate in 2024, contended that Lee County officials acted appropriately when they issued their first mandatory evacuations last Tuesday—less than twenty-four hours before expected landfall.

“They were following the data,” DeSantis said during a press conference on Saturday.

“And you remember, people were looking initially at the Panhandle on Sunday, then Monday came and people were thinking maybe north of Tampa Bay. When we went to bed Monday night people were saying this is a direct hit on Tampa Bay, worst case scenario for the state,” he continued. “As that track started to shift south and the computer models, the next morning they called for the evacuation, they opened their shelters and they responded very quickly to the data. But at the end of the day, Fort Myers and Naples, on Sunday, I think at the 11 a.m. advisory, seventy-two hours out, they weren’t even in the cone. That’s just the reality, so they followed it very closely.”

Meanwhile, as reported by CBS News, other counties in Hurricane Ian’s path, such as Hillsborough, Pinellas, Manatee, Sarasota, and Charlotte, spent the day on Monday issuing evacuation orders to their residents. Even before Hillsborough County issued the formal order, Tampa Mayor Jane Castor was urging the public to evacuate immediately.

“If you can leave, just leave now, and we will take care of your personal property,” she said on CNN on Monday.

However, Sen. Rick Scott (R-FL) declined to assign any blame. “We're going to look and find out” if proper evacuation procedures were followed, he told CNN.

“I think once we get through this, we do an assessment. What I've always tried to do as governor is say, okay, so what did we learn in each one of these,” he added.

“The storm itself was fairly unpredictable in the days leading up to landfall,” Criswell said on ABC’s This Week.

“Just seventy-two hours before landfall, the Fort Myers and Lee County area were not even in the cone of the hurricane. And as it continued to move south, the local officials immediately—as soon as they knew that they were in that threat zone, made the decisions to evacuate and get people to safety,” she continued.

Speaking to CNN on Saturday, Fort Myers city council member Liston Bochette acknowledged that “people did not evacuate as they should have.”

“Obviously, about one time in ten when they warn you, it happens,” he said. “Well, this is that one time … And I think we're lulled into ... this is a little paradise corner of the world and we got lulled into a passive mindset that it's not going to hit us.”