DirecTV to Drop OAN From Its Airwaves on Tuesday 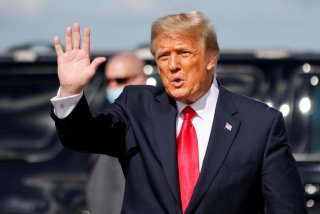 Despite protests from former President Donald Trump, DirecTV is sticking with its decision to drop the conservative One America News Network (OAN.) On its “TV Channel Updates” page, DirecTV notes that after April 4, OAN is leaving the service. The date is when the parties’ contract expired, although OAN and DirecTV will continue their advertising agreement.

“OAN content is still available directly on their website (oann.com) and through their mobile app,” the site says. A Wealth of Entertainment (AWE), another television network, is also departing the satellite service, also after April 4.

In January, it was announced that DirecTV was going to drop OAN in the spring. According to The New York Daily News, OAN challenged the decision on air, with host Dan Ball attempting to dig up dirt on AT&T chairman William Kennard and accusing him of “cheating on his taxes, cheating on his wife (or) saying racial slurs against white people.”

Then, in March, OAN sued DirecTV, seeking $1 billion in damages from the satellite broadcaster and AT&T. The suit accused the companies of working to “unlawfully destroy an independent, family-run business and impede the right of American television viewers to watch the news media channels and programs of their choice.”

The same week of the lawsuit, a small group of Republican Senators, including Sen. Ted Cruz (R-TX) and Sen. Mike Lee (R-UT), wrote a letter to AT&T, with “grave concern for the future of journalism and political discourse in America.” Separately, a group of Republican attorneys general, led by Ken Paxton of Texas, wrote a letter to DirecTV’s CEO, Bill Morrow, complaining about the OAN move. The letter copied the CEO of AT&T and every board member.

“This is highly troubling and disappointing,” the state prosecutors said of the channel cancellation. “Not just because this is an unwise business decision, but because you are masking what is obviously viewpoint discrimination with neutral corporate-speak; your decision was certainly not based on a ‘routine internal review.’ Rather, your cancelation of OAN comes after a crescendo of powerful leftwing voices demanded that you take action against them.” The letter went on to cite calls by former president Trump for subscribers of DirecTV to cancel their service in response to the dropping of OAN.

Reuters reported in 2021 that AT&T’s role in the creation of OAN was more significant than previously disclosed. After the 2020 presidential election, OAN became associated with conspiracy theories alleging that the election was stolen from former President Donald Trump.

Trump, who was frequently praised on OAN, immediately made the move a regular part of its rally speeches, even calling for boycotts of DirecTV, as well as AT&T and Comcast. DirecTV is no longer a subsidiary of AT&T, following a spinoff in 2021, although the telecom giant still owns a controlling stake in it. Comcast is a separate company that has nothing to do with AT&T or DirecTV, although it does own NBC Universal, which is the owner of MSNBC.

In March, Trump expanded the attack to include a company that no longer exists. A Trump statement, tweeted by a spokesperson, implied that a second company had followed DirecTV in dropping OAN from its channel lineup.

“Time Warner, the owner of Fake News CNN, has just announced that they will be terminating a very popular and wonderful news network (OAN). Between heavily indebted Time Warner, and Radical Left Comcast, which runs Xfinity, there is a virtual monopoly on news, thereby making what you hear from the LameStream Media largely FAKE.”

The entity formerly known as Time Warner was acquired by AT&T in a contentious merger that mostly took place while Trump was president. This merger briefly made Time Warner a corporate sibling of DirecTV.

But the company has renamed itself WarnerMedia and hasn’t used the “Time Warner” name since the AT&T merger. At any rate, “Time Warner” wouldn't be in any position to drop a cable channel from its lineup, as then-Time Warner dropped its cable arm, Time Warner Cable, in 2016, when it was sold to Spectrum. Furthermore, AT&T is now in the process of spinning off WarnerMedia, as it did with DirecTV last year.

Even more strangely, a constellation of liberal, anti-Trump Twitter accounts, led by Occupy Democrats, took Trump’s “Time Warner” claims at face value and mined the “controversy” to ask their readers to “stand with” Time Warner over their “decision” to drop the pro-Trump channel.