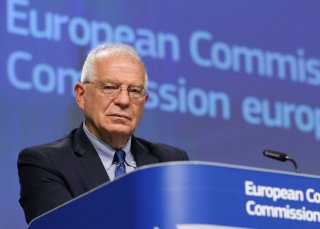 European Union High Representative Josep Borrell condemned “abuse of power” by American police after the death of George Floyd at the hands of Minneapolis police sparked days of civil unrest.

U.S. adversaries around the world have long used racial tensions and police brutality for anti-American propaganda, but the past few days of unrest have also prompted concern from U.S. allies, from Europe to Australia.

“We are shocked and appalled by the death of George Floyd, and I think all societies must remain vigilant against the excessive use of force and ensure that all such incidents are addressed safely, effectively, and in all respect for the rule of law and human rights,” Borrell said in video posted to social media on Tuesday. “We support the right to peaceful protest, and also we condemn violence and racism of any kind. For sure, we call for a de-escalation of tensions.”

The European foreign minister called Floyd’s death an “abuse of power.” Floyd, an African-American man, had died after police officer Derek Chauvin placed his knee on Floyd’s neck for several minutes during an arrest.

Chauvin has been charged with second-degree manslaughter and third-degree murder, but the incident sparked nationwide controversy over the police’s treatment of African-Americans.

Police killed a protester in Louisville, Kentucky and five police officers were shot and injured in cities across the country on Tuesday.

“I hope that these peaceful protests won't slide further into violence, but even more than that I hope that they will make a difference in the United States,” German foreign minister Heiko Maas had told reporters earlier.

U.S.-European relations have already been strained as both sides of the Atlantic disagree on how to handle Iran, Latin America, and the coronavirus pandemic.

Police reactions to the unrest have also created a diplomatic incident with Australia, another close U.S. ally.

Australian foreign minister Marisa Payne said that her country had “strong concerns” and would “investigate” after an Australian news crew was struck by police on camera.

U.S. Attorney General William Barr had ordered police to clear protesters from the plaza in front of the White House as President Donald Trump prepared to walk across the street to pay his respects at St. John’s Episcopal Church, which had been vandalized the night before.

An officer smacked Channel 7 reporter Amelia Brace with a baton during the police charge, in an incident the Australian news station called “wanton thuggery.”

The incident prompted the British foreign ministry to issue a statement.

“We understand that the journalists have been released and [Minnesota governor Tim Waltz] has apologised for the arrest,” the U.K. Foreign and Commonwealth Office told Express & Star. “As we’ve said before, journalists all round the world must be free to do their job and hold authorities to account without fear of retribution.”