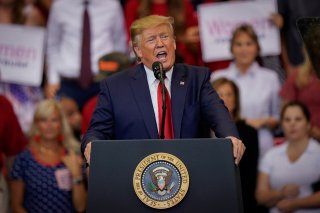 Wednesday was a very eventful day for former President Donald Trump and the many government investigations targeting him.

In the morning, New York Attorney General Letitia James announced a major lawsuit against Trump, accusing him of “years of financial fraud” in connection with his time running the Trump Organization before becoming president.

“The lawsuit alleges that Donald Trump, with the help of his children Donald Trump, Jr., Ivanka Trump, and Eric Trump, and senior executives at the Trump Organization, falsely inflated his net worth by billions of dollars to induce banks to lend money to the Trump Organization on more favorable terms than would otherwise have been available to the company, to satisfy continuing loan covenants, to induce insurers to provide insurance coverage for higher limits and at lower premiums, and to gain tax benefits, among other things,” the attorney general’s announcement said.

James’ suit, which is not a criminal indictment but does contain criminal referrals to the U.S. Attorney’s Office for the Southern District of New York and the Internal Revenue Service, would seek to ban Trump and his three oldest children from serving as directors in any New York company, as well as to “award disgorgement of all financial benefits obtained through the persistent fraudulent practices, estimated to total $250 million.”

On Truth Social, Trump referred to the attorney general as “Peekaboo James” and described her as a “failed A.G. whose lack of talent in the fight against crime is causing record numbers of people and companies to flee New York. Bye, bye!”

Then, later in the day, there was a big development in another Trump case, this time the Mar-a-Lago documents probe. A three-judge panel of the 11th US Circuit Court of Appeals, two of whom were Trump appointees, overruled a trial judge and declared that the Justice Department can continue to look at documents that were marked as classified.

Judge Aileen M. Cannon, also a Trump appointee, had in an earlier ruling halted that process and ordered the appointment of a special master. But now, she has been overruled.

“It is self-evident that the public has a strong interest in ensuring that the storage of the classified records did not result in ‘exceptionally grave damage to the national security,’” the ruling said, per CNN. “Ascertaining that necessarily involves reviewing the documents, determining who had access to them and when, and deciding which (if any) sources or methods are compromised.”

The panel also questioned Trump’s claims that he declassified the documents.

The former president would reiterate his views on classification during an interview with Fox News’ Sean Hannity on Thursday, which was scheduled before either the New York lawsuit or the Fifth District ruling came down. In fact, it was Trump’s first live TV interview since the Mar-a-Lago search.

Trump claimed in the interview that presidents can declassify information “even by thinking about it.”

“There doesn’t have to be a process, as I understand it,” Trump told Hannity. “If you’re the president of the United States, you can declassify just by saying it’s declassified.” Trump and his allies have stated that he had a “standing order” to declassify any materials that he brought from the White House to his Florida estate. Trump also called the New York attorney general’s lawsuit a “witch hunt.”

Presidents do not, in fact, have the power to declassify materials “even by thinking about it.”

“If there is no directive memorializing a decision to declassify information and conveying it to the rest of the government, the action would essentially have no consequence, as departments and agencies would continue to consider that information classified and so would continue to restrict access to documents containing it,” an August New York Times article said.

“Hypothetical questions like ‘What if a president thinks to himself that something is declassified? Does that change its status?’ are so speculative that their practical meaning is negligible,” Steven Aftergood, a secrecy specialist with the Federation of American Scientists, told the Times last month. “It’s a logical mess. The system is not meant to be deployed in such an arbitrary fashion.”

“I’m very very excited for tomorrow when we will find out which members of Congress embrace the idea that Trump can telepathically declassify documents,” Sen. Brian Schatz (D-HI) tweeted on Wednesday.

On top of the Mar-a-Lago probe and the New York attorney general’s lawsuit, the former president is facing at least four other active investigations, including the January 6 inquiries by the Select Committee and the Department of Justice, the investigation into his phone call in 2020 to Georgia Secretary of State Brad Raffensperger, and the Manhattan District Attorney’s Trump Organization probe.