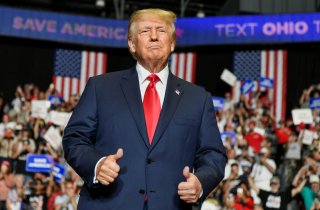 In the early stages of the court battle over the documents seized from former President Donald Trump’s Mar-a-Lago estate, Trump’s lawyers appear to have made some contradictory statements.

According to the New York Times, Trump’s lawyers on Monday “insisted that he should not have to formally declare in court whether, as he has claimed publicly, he had used his power before leaving office to declassify sensitive documents.” However, the following day, the former president’s legal team argued in a legal filing that "the Justice Department has not proved that those same documents, some of which carry markings indicating the highest level of government secrecy, continue to be classified.”

“The government again presupposes that the documents it claims are classified are, in fact, classified and their segregation is inviolable,” the latter filing said. “However, the government has not yet proven this critical fact. The president has broad authority governing classification of, and access to, classified documents,” it continued.

Trump and his supporters have claimed that the then-president had a “standing order” to declassify documents brought to the Florida estate, although this has been described as a “dubious” assertion.

The Justice Department is seeking to regain access to about 100 classified records, the Times said, after Judge Aileen M. Cannon of Federal District Court for the Southern District of Florida granted Trump’s request for a special master to review documents taken in the raid that could be protected by the attorney-client privilege.

A Politico report this week looked at how Cannon’s ruling has broken with views from the conservative legal community about executive power.

“A robust view of executive power says it’s really not the job of the courts to decide what’s classified or unclassified,” John Yoo, author of the infamous “torture memos” during the Bush administration, told Politico. “I think most people who agree on the unitary executive also think it’s the president who decides what’s classified and unclassified—the current, incumbent, sitting president.”

“It’s a waste of time. … How is a judge going to determine whether or not something will gravely injure the national interest? That’s not what their competence is,” the Trump administration official continued.

Edward MacMahon Jr., a lawyer who has represented “spies and terrorists” in the past, was also dumbfounded by the rulings.

“I’ve never, in 35 years, seen an order like that in a criminal case,” MacMahon told Politico. “Every espionage client I’ve ever had would really like to have had this judge and get a special master approved and slow down the process. It’d be very helpful.”