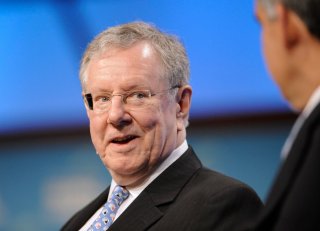 Steve Forbes, chair of Forbes Media, contended on Monday that central banks and governments are focusing too much on hiking interest rates to cool inflation, instead of instituting policies to maintain stable currencies, CNBC reported.

“No central banker today—hardly any—talks about stable currencies,” Forbes, a Republican who twice ran for president, said during the Forbes Global CEO Conference in Singapore. “It’s about depressing the economy to fight inflation.”

Forbes cited an example from the 1980s when the Reagan administration coordinated global efforts to sell dollars and buy up other currencies in tandem with aggressively hiking rates to bring down inflation.

“Today, unfortunately, not only is the Biden administration putting up obstacles to deal with supply-side problems, but also the Federal Reserve and other central banks think you have to depress the economy to bring inflation down,” he said.

“They do it by artificially raising interest rates. So they have fewer people employed ... that is not the real cure. The real cure is to stabilize the currency. You don’t have to make people poor to conquer inflation,” he continued.

Last week, the Federal Reserve approved a third consecutive seventy-five-basis-point interest rate hike, taking the federal funds rate up to a range of 3 percent to 3.25 percent, the highest level seen since the global financial crisis in 2008. As the dust settled on that hawkish move, some experts were quick to slam the Federal Reserve and Chairman Jerome Powell, saying that it will only hurt American workers.

“Honestly, I think Chairman Powell should offer the American people an apology for such poor monetary policy that he has pursued, and the Fed has pursued, over the past few years,” Wharton Business School professor Jeremy Siegel said Monday on CNBC’s Squawk Box.

“Chairman Powell talked quite a bit about JOLTS data—the job opening and labor turnover data. How tight it is. ... Interesting thing, I look back a year ago September, it was exactly as tight as it is today. And he never said anything about inflation. What’s caused him to change his mind? It’s the same data,” he added.

“There are lags in monetary policy and we have moved expeditiously,” he told CNBC. “We have done three seventy-five basis point increases in a row and there is a talk of more to get to that 4.25 percent to 4.5 percent by the end of the year, you’re not leaving much time to sort of look at each monthly release.”