Yellen Admits She Was Wrong to Think Inflation Was ‘Transitory’ 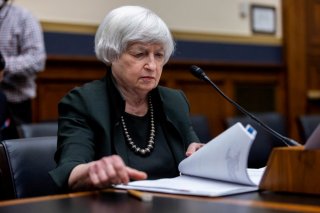 Treasury Secretary Janet Yellen this week admitted that she erred by believing inflation was “transitory,” but contended that the White House has several strategies that will eventually help reduce the burden of high costs on Americans.

“I think I was wrong then about the path that inflation would take,” she told CNN’s Wolf Blitzer on Tuesday. “There have been unanticipated and large shocks that have boosted energy and food prices, and supply bottlenecks that have affected our economy badly that I ... at the time, didn’t fully understand. But we recognize that now,” she continued.

Her remarks came on the same day President Joe Biden met with Yellen and Federal Reserve chairman Jerome Powell, whose institution has become more aggressive in recent weeks in an effort to tame inflation that has hit a forty-year high.

“The president emphasized his intention to do everything he can to lower the costs that Americans face for important items in their budget,” Yellen said during an interview on CNBC. She added that “prescription drugs, for utility bills, things, where the President acting on his own or working with Congress, can make a difference, and also his support for deficit reduction.”

Yellen noted that she is confident that the Biden administration and the Fed are seeing eye to eye on how best to tackle fast-rising costs in the country. “The Fed has a dual mandate and it is maximum employment and price stability. I think that’s the way it’s phrased in the law,” she said.

“But we are at full employment. We have a very strong labor market. That’s been achieved, but inflation is way too high, and it’s really a big burden on American households. And so maintaining full employment while bringing inflation down, that’s the president’s priority and I believe that’s consistent with how the Fed sees its programs,” she continued.

Meanwhile, Fed vice-chair Lael Brainard on Thursday acknowledged that it would be “very hard to see the case” for the Fed pausing rate hikes anytime soon.

Although Fed policymakers will remain data-dependent, “we’ve still got a lot of work to do to get inflation down to our 2 percent target,” she told CNBC. “We’re certainly going to do what is necessary to bring inflation back down. That’s our number one challenge right now. We are starting from a position of strength. The economy has a lot of momentum,” she continued.

Markets currently are pricing in two fifty-basis point increases at the next Fed meetings.