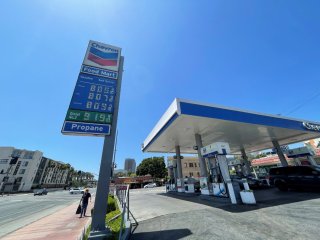 Gas prices in the U.S. rose again over Memorial Day weekend, and with the news that the European Union has approved a partial ban of oil from Russia, that price is likely to rise again soon.

According to GasBuddy, the average gas price in the United States has risen to $4.60 per gallon, marking the sixth consecutive week in which the price has increased. The national average has risen 42.8 cents from a month ago, and $1.56 per gallon from a year ago. For example, Wisconsin and Colorado each posted an increase of eleven cents over the previous week, while the price went up ten cents each in California and Utah.

“After several weeks of soaring gas prices, last week saw prices nationally slow down ahead of Memorial Day, but I’m afraid the good news ends there,”  Patrick De Haan, head of petroleum analysis at GasBuddy, said in a blog post on Tuesday.

“Coupled with continued talk that the EU is still working on sanctioning Russian oil, even though Hungary is a holdout, oil markets are quite on edge. As a result of the continued decline in gasoline inventories in recent weeks, wholesale gas prices surged last week, which will likely boost prices at the pump in short order,” he added. "Motorists in the Great Lakes could see prices jump early in the week to new record highs, and the rest of the nation will follow. Odds are rising that we’ll eventually see the national average reach that dreaded $5 per gallon.”

AAA, in its weekly report, stated that the average price rose three cents to $4.62 in the last week, while acknowledging that the respite could be brief, citing the EU’s move as well as rising demand from regular summer driving. The AAA report put the average price at “5 cents more than a month ago, and $1.58 more than a year ago.”

“So far, the pent-up urge to travel caused by the pandemic outweighs high pump prices for many consumers,” Andrew Gross, AAA spokesperson, said in the release. Gross continued: “But 67% of drivers recently surveyed told us they would change their driving habits if gas hit $4.50 a gallon. That number rises to 75% at $5 a gallon. If pump prices keep rising, will people alter their summer travel plans? That remains to be seen.”

Meanwhile, the EU touted its sanctions agreement on Tuesday. “Agreement to ban export of Russian oil to the EU,” Charles Michel, the president of the EU, tweeted Tuesday. “This immediately covers more than 2/3 of oil imports from Russia, cutting a huge source of financing for its war machine. Maximum pressure on Russia to end the war.”