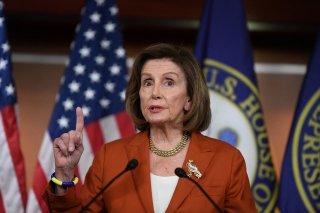 The House of Representatives on Tuesday passed a bill protecting same-sex marriage rights amid concerns that the Supreme Court ruling last month overturning Roe v. Wade could jeopardize other rights being targeted by conservatives.

The Respect For Marriage Act, which passed the Democratic-controlled chamber by a vote of 267-157, with support from forty-seven Republicans, establishes that a marriage is considered valid under federal law if it was legal in the state where it was performed. It also explicitly bars anyone from denying “full faith and credit” to an out-of-state marriage based on sex, race, ethnicity, or national origin, regardless of any individual state’s law.

The bill now faces an uncertain future in the Senate, where passage will require at least ten Republican votes.

According to ABC News, Rep. Jerry Nadler (D-NY), who started the debate on the bill, said that the legislation “would reaffirm that marriage equality is and must remain the law of the land.”

“Congress should provide additional reassurance that marriage equality is a matter of settled law. All married people building their lives together must know that the government must respect and recognize their marriage for all-time,” he added.

Meanwhile, Rep. Jim Jordan (R-OH) called the bill an attempt to “intimidate” the Supreme Court and stated that the threat to same-sex marriage was a “manufactured crisis.”

In a show of Republican support, Rep. Nicole Malliotakis (R-NY) said that she “will vote to codify same-sex marriage to ensure our fellow Americans continue to have the right to equal marriage and benefits under federal law.”

The Biden administration strongly endorsed the bill ahead of the vote. “No person should face discrimination because of who they are or whom they love, and every married couple in the United States deserves the security of knowing that their marriage will be defended and respected,” it said in an official statement.

Concern among some lawmakers and advocates regarding the legal fate of same-sex marriage began to rise after Justice Clarence Thomas’ separate opinion on the abortion decision was revealed. He referred to the 2015 Obergefell Supreme Court ruling, which guaranteed nationwide same-sex marriage rights, as “demonstrably erroneous” and suggested that the court should revisit other decisions.

“Because any substantive due process decision is ‘demonstrably erroneous,’ we have a duty to ‘correct the error’ established in those precedents,” Thomas wrote.

“I think that decision was clearly wrong when it was decided. It was the court overreaching,” he said.