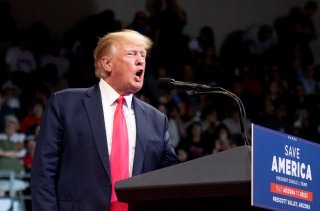 Earlier this week, former President Trump’s Mar-a-Lago estate in Florida was raided by federal agents. Subsequent reporting showed that the raid was in connection with the probe into the former president’s handling of classified documents.

Now, a bombshell new report says that agents were led to the documents by an informer.

According to Newsweek, a “confidential human source” was "able to identify what classified documents former President Trump was still hiding and even the location of those documents.” The report cited two senior government officials, both of whom have “direct knowledge of the FBI's deliberations and were granted anonymity in order to discuss sensitive matters.”

One of the sources was further identified as “a senior Justice Department official who is a 30-year veteran of the FBI.”

The story added that the raid was timed for a day when the former president was not at the estate, in order to keep it “low-key,” but that’s clearly not what happened.

"I know that there is much speculation out there that this is political persecution, but it is really the best and the worst of the bureaucracy in action," the official told Newsweek. "They wanted to punctuate the fact that this was a routine law enforcement action, stripped of any political overtones, and yet [they] got exactly the opposite.”

The piece also noted that Trump had signed a measure into law making it a felony to “remove and retain classified documents," in response to the Hillary Clinton email scandal, which was a major issue in the 2016 election.

In the days since the raid, supporters of the former president have pushed a surprising—and evidence-free—talking point: That FBI agents might have planted evidence during the raid.

Alina Habba, an attorney for the ex-president said in a TV interview with Fox News this week that “This is a joke. This is a memento. Quiet honestly, I'm concerned that they may have planted something. At this point who knows? I don't trust the government and that's a very frightening thing as an American.”

The former president himself suggested something similar, on his Truth Social platform.

"The FBI and others from the Federal Government would not let anyone, including my lawyers, be anywhere near the areas that were rummaged and otherwise looked at during the raid on Mar-a-Lago," Trump said in the post. “Everyone was asked to leave the premises, they wanted to be left alone, without any witnesses to see what they were doing, taking or, hopefully not, planting.”

It is, in fact, the standard operating procedure for no one to be present, lawyers included, during such law enforcement raids.