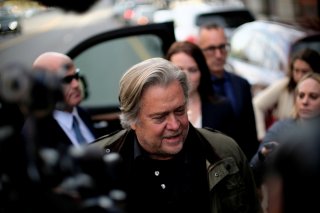 The House January 6 Select Committee, tasked with investigating the attack on the U.S. Capitol Building on that date, voted unanimously to refer former White House Chief Strategist Steve Bannon to the Justice Department for prosecution on Tuesday, following his public refusal to cooperate with a legally binding committee subpoena.

The recommendation sends the matter of Bannon’s referral to the full House, which is expected to vote in favor of it, given the Democrats’ slim majority over the Republicans there. If the House votes to refer Bannon to the Department of Justice, Attorney General Merrick Garland can decide whether to pursue the referral or not; if he does, Bannon can be arrested and charged with contempt of Congress.

Rep. Bennie Thomson (D-MS), the committee chairman, indicated his approval of the vote in his opening statement, given the high stakes involved in the investigation.

“When you think about what we’re investigating—a violent attack on the seat of our democracy perpetrated by fellow citizens, on our Constitution [...] it’s shocking to me that anyone would not do everything in their power to assist our investigation,” Thompson said.

Thompson noted that Bannon was the only witness who had maintained “complete defiance” of the subpoena, after two other Trump officials, Mark Meadows and Kash Patel, indicated they would be willing to testify after initially claiming they would not.

Bannon, Meadows, and Patel had earlier argued that “executive privilege,” a legal doctrine that allows the President to withhold certain information in the public interest, protected them from testifying. President Donald Trump, who helped to stage a rally on January 6 that precipitated the mob attack, filed a lawsuit on Monday claiming executive privilege for the men, although it is unclear if a former president has the right to do so.

Liz Cheney (R-WY), a prominent anti-Trump Republican and one of the two members of the GOP on the committee, criticized this move, arguing that Bannon had “no legal right to ignore the Committee’s lawful subpoena.”

Cheney also noted that Trump’s lawsuit made it appear that the former president was personally involved in organizing the day’s events.

Bannon’s fight against the committee is not the first legal trouble for the former White House official. In August 2020, he and three others were arrested after crowdfunding the construction of a section of the border wall between the United States and Mexico. Prosecutors accused Bannon and the other defendants of accepting the donations and then keeping the money.

Bannon was pardoned by President Trump before the trial began, although his three co-defendants were not.