Jayapal: Biden Should Double Down on Build Back Better 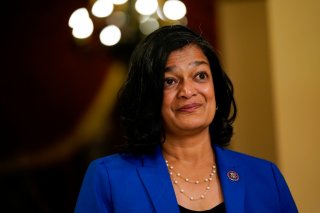 Rep. Pramila Jayapal (D-WA), leader of the Congressional Progressive Caucus (CPC), urged President Joe Biden to continue pursuing the Build Back Better bill in a Washington Post op-ed on Sunday, in spite of Sen. Joe Manchin’s (D-WV) indication that he would not vote for it in its current form.

The Washington representative, who has served in Congress since 2017, argued in the op-ed that the CPC would make suggestions on how to improve the proposed legislation, including through additional healthcare reform and action on climate change.

“The president’s agenda is even more urgent today,” Jayapal wrote, underscoring the ongoing difficulties that the COVID-19 pandemic, as well as the emergence of the Omicron variant, created for working families in the United States. “The omicron variant is surging as covid-19 has once again disrupted people’s ability to work, care for children and elders, access medical care, and make ends meet. We simply cannot abandon our vision.”

Manchin’s announcement that he would not support the Build Back Better bill reverberated through Washington, drawing an irate response from many progressive legislators and a rebuke from White House Press Secretary Jen Psaki, who suggested in a statement that he had earlier told Biden he would support the bill. After the announcement was made, investment bank Goldman Sachs lowered its economic growth forecasts for the United States in 2022, decreasing prospective U.S. growth in the first three quarters—a fact later noted by Vice President Kamala Harris, who claimed that the administration would continue to push for the bill.

Jayapal described Manchin’s decision as a “stunning rebuke” of Biden, claiming that he had violated the president’s trust.

“We can’t be naive about the difficulty of once again negotiating with someone who has not kept his commitments,” she wrote, criticizing the West Virginia senator.

Even so, Jayapal argued, continued negotiations over the scope of the bill were preferable to abandoning it outright. "The Progressive Caucus will continue to work toward legislation for Build Back Better, focused on keeping it as close to the agreed-upon framework as possible," she added.

Senate Majority Leader Chuck Schumer (D-NY) has promised that the bill, with or without amendments, will receive a floor vote in the U.S. Senate in early 2022. Without Manchin’s approval, however, it is certain to fail in the evenly divided Senate, as all Republican senators have opposed it from the outset.