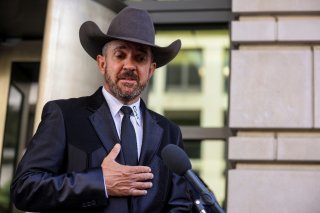 A New Mexico judge on Tuesday removed January 6 rioter and Cowboys for Trump founder Couy Griffin from his elected position as county commissioner, becoming the first public official to lose their job for participating in the U.S. Capitol attack, CNN has reported.

State District Court Judge Francis Mathew wrote in his decision that the Otero County commissioner violated Section 3 of the 14th Amendment of the U.S. Constitution when he took part in the “insurrection” against the U.S. government, which disqualified him from holding any local, state, or federal elected position in the future. It also marked the first time that a judge formally ruled that the events of January 6 were an “insurrection.”

In June, a District of Columbia federal judge sentenced Griffin to fourteen days in jail with time served and one year of supervised release after he was found guilty of trespassing during the riot.

“The irony of Mr. Griffin’s argument that this Court should refrain from applying the law and consider the will of the people in District Two of Otero County who retained him as a county commissioner against a recall effort as he attempts to defend his participation in an insurrection by a mob whose goal, by his own admission, was to set aside the results of a free, fair and lawful election by a majority of the people of the entire country [the will of the people] has not escaped this Court,” Mathew wrote.

Griffin’s attempts “to sanitize his actions are without merit” and “amounted to nothing more than attempting to put lipstick on a pig,” he continued.

Griffin responded to the ruling by calling the judge “tyrannical.”

“I’m shocked. Just shocked,” he said. “I really did not feel like the state was going to move on me in such a way. I don’t know where I go from here.”

According to Reuters, Griffin confirmed that he plans to appeal the ruling, saying that the judge had no jurisdictional standing to remove him from office.

“I was shocked by the response from the court. It's a real disgrace towards our democracy,” he told the news agency. “This is very evident of the tyranny that is raising its head up in our country.”

Meanwhile, the Citizens for Responsibility and Ethics in Washington (CREW), an ethics watchdog that filed a lawsuit against Griffin, applauded the judge’s decision.

“This is a historic win for accountability for the January 6th insurrection and the efforts to disrupt the peaceful transfer of power in the United States. Protecting American democracy means ensuring those who violate their oaths to the Constitution are held responsible,” CREW president Noah Bookbinder said in a release.

“This decision makes clear that any current or former public officials who took an oath to defend the U.S. Constitution and then participated in the January 6th insurrection can and will be removed and barred from government service for their actions,” he added.