Key Democrat Open to Scaling Back the Child Tax Credit 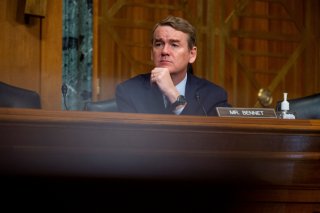 Sen. Michael Bennet (D-Colo.) appears to be open to the idea of scaling back eligibility for the enhanced child tax credit—seen by many as an unofficial fourth stimulus check—to garner support from Sen. Joe Manchin (D-WV), whose vote is key in an evenly split Senate, according to Axios.

Axios wrote that Bennet is willing to lower the current income limit of $150,000 for families and $90,000 for single Americans. However, Bennet remains opposed to adding a work requirement.

The senator, though, did not disclose how much of a reduction he is open to. Bennet did confirm that the Biden administration knows he is willing to consider lower caps.

“I always believed those were reasonable caps, but I’m happy to think about other caps if that’s important to getting something done here,” Bennet added.

Manchin, on the other hand, told West Virginia MetroNews that he wants to lower the income limit to $75,000. He has contended for weeks that extending the enhanced credits would only discourage people from working and that additional federal spending would only exacerbate current inflationary pressures.

A Letter to the President

Before this apparent willingness to compromise, Bennet and other top Senate Democrats urged President Joe Biden in a letter to keep the enhanced child tax credit as the “centerpiece” of the stalled Build Back Better legislation, which aims to tack on another twelve months of the direct payments.

“Without the expanded credit, nearly ten million children will be thrown back into or deeper into poverty this winter, increasing the monthly child poverty rate from roughly 12 percent to at least 17 percent. After historic progress, it is unacceptable to return to a status quo in which children are America’s poorest residents and child poverty costs our nation more than $1 trillion per year. Raising taxes on working families is the last thing we should do during a pandemic,” they added.

The CTC Takes on Poverty

Recent studies and polls have indicated that the consequences of ending the enhanced child tax credit could be quite dire.

According to an analysis released by the Center on Poverty and Social Policy at Columbia University, approximately four million children could potentially fall back into poverty.

“We know that the child tax credit was sort of holding poverty at bay for so many families,” noted Megan Curran, policy director at the center and one of the authors of the report, per CNBC. “All of that progress is likely to be erased in January.”