Kremlin: Brittney Griner’s Release Not a Priority for Russia 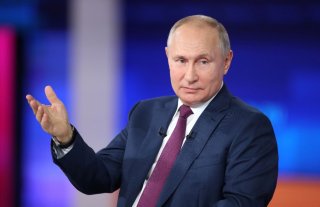 An aide to Russian President Vladimir Putin said on Sunday that the release of WNBA star Brittney Griner isn’t a priority for the Kremlin, Axios reported.

“In this tense situation, I think that [President Joe Biden] is thinking first and foremost about the upcoming midterm elections,” said Kremlin aide Yury Ushakov on Russian TV, according to state news agency TASS.

“So he keeps emphasizing the need to bring back home the basketball player who was detained for drug smuggling. However, it's not the main issue that we are concerned about,” he continued.

Ushakov’s remarks come as Griner’s lawyer told the New York Times last Wednesday that the two-time Olympic gold medalist is “afraid” that she will be forced to serve the entirety of her nine-year prison sentence over drug charges.

“She is not yet absolutely convinced that America will be able to take her home,” said Griner’s attorney, Alexandr Boykov.

“She is very worried about what the price of that will be, and she is afraid that she will have to serve the whole sentence here in Russia,” he continued, adding that Griner “has not been in as good condition as I could sometimes find her in.”

Griner, currently detained in a penal colony outside of Moscow and awaiting an appeal date on October 25, was initially detained at Moscow’s Sheremetyevo International Airport in mid-February. During her testimony, the Houston native contended that she did not know how the cannabis oil for which she had a doctor's prescription ended up in her bag, explaining that she had packed in haste while under great stress.

But in early August, the judge found that she had criminal intent and said she was guilty of smuggling and storing illegal drugs. The nine-year sentence was close to the maximum of ten years, and her lawyers argued after the conviction that the punishment was excessive.

Last month, National Security Council coordinator John Kirby said during a White House media briefing that Russia has yet to respond to the “substantial proposal” that the Biden administration offered back in July regarding the release of Griner and former U.S. Marine Paul Whelan.

Meanwhile, Russia has officially stated that it was seeking convicted arms dealer Viktor Bout, who is currently serving a twenty-five-year prison sentence and once earned the nickname the “Merchant of Death,” as part of any potential prisoner exchange.