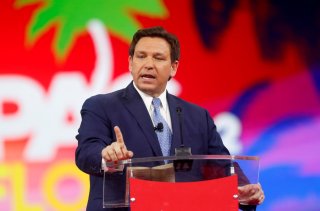 Florida Gov. Ron DeSantis, who is a potential candidate for a 2024 presidential run, has not asked former President Donald Trump for a formal endorsement and isn’t planning to, according to a Politico report on Wednesday.

“[DeSantis is] a Cat 5 hurricane in Florida politics—and in a good way if you are a Republican,” Anthony Pedicini, a veteran GOP consultant in Florida, told the news outlet. “He is a force of nature.” However, if Trump decides to take another run at the White House, it could potentially set up a heavyweight clash between two of the most powerful figures in the Republican party.

A person familiar with Trump’s endorsement process told Politico that if DeSantis asked for the former president’s backing, “he would endorse him.” However, the outlet did note that such an endorsement “would not likely change DeSantis’ frontrunner status in Florida among his … supporters.”

Recent polls and surveys have consistently shown the governor having a leg up on his Democratic rivals. In straw polls in Wisconsin, Nevada, and the annual Western Conservative Summit survey, DeSantis has even garnered more support than Trump.

“DeSantis’ decision to forgo a Trump endorsement is a stark contrast from four years ago,” Politico writes. “In 2018, DeSantis was seen as a long shot challenger, running against then-Agriculture Commissioner Adam Putnam. Putnam had backing from the Republican establishment and a money advantage. But DeSantis shook the foundations of the race when he picked up a crucial endorsement from Trump ahead of the primary.

“A lot has changed in four years. DeSantis is now a nationally-recognized Republican figure who was highly praised by conservatives during the pandemic for fighting against shutdowns and Covid-19-related mandates. He has also very publicly battled liberals over education, race relations and LGBTQ issues,” it continues.

Despite this, DeSantis has continued to sidestep questions about his plans for a 2024 White House run. During a recent Fox and Friends appearance, he was asked if he would run if Trump also decided to. DeSantis responded by saying “nice try,” and waited for the next question.

Christian Ziegler, the vice-chair of the Republican Party of Florida, told Politico that the increasing talk about the relationship between Trump and DeSantis was part of “false narratives” pitting the two high-profile Republicans against each other. “Republicans understand what's going on and we won't be fooled,” he said. “We aren't just unified, but we are ecstatic to be living in a state that is governed by DeSantis and counts President Donald Trump as a resident.”

Meanwhile, Trump told Newsmax on Monday that his relationship with DeSantis was “very good.”