No, Elon Musk Is Not Buying Manchester United 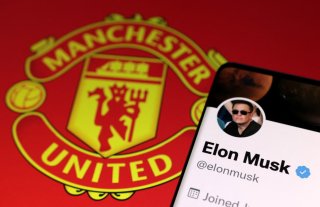 Earlier this week, Elon Musk spoke on Twitter about making a controversial purchase that, despite being something of a distressed asset, would likely cost billions of dollars.

It wasn’t Twitter but the soccer club, Manchester United.

Musk tweeted Tuesday the pronouncement that “I support the left half of the Republican Party and the right half of the Democratic Party!” In his next tweet, Musk declared “also, I’m buying Manchester United ur welcome.”

Musk later clarified that he wasn’t serious about the offer. "No, this is a long-running joke on Twitter. I’m not buying any sports teams,” he said in a subsequent tweet. He later added that “although, if it were any team, it would be Man U. They were my fav team as a kid.”

The English Premier League soccer club, which in a rarity for sports teams is a publicly traded company, has a market capitalization of over $2 billion, which is considerably less than the $44 billion price tag for which Musk agreed to buy Twitter earlier this year. That deal is currently in limbo, with Musk seeking to exit the agreement and Twitter seeking to hold him to it. The dispute is scheduled to go to trial this October in the Delaware Chancery Court.

Known as “Man U,” the club is off to a poor start in the early going of the Premier League season, having lost their first two games. They are in twentieth place, out of twenty teams, in the league after losing 4-0 to Brentford on Saturday.

The team does not appear to be for sale, but the Glazer family, the American family who own Manchester United as well as the NFL’s Tampa Bay Buccaneers, said this week that they are open to selling a minority stake in the team, Bloomberg News reported.

Meanwhile, Reuters reported that Manchester United fans, who have been agitating for years for the Glazers to sell the team, expressed joy at the possibility of Musk, the world’s richest man, buying the club.

Per Reuters, Musk “has a history of unconventional actions and comments, making it difficult sometimes to tell when he is joking,” citing when he announced his intention to buy Coca-Cola in order to “put the cocaine back in.”

Prominent wealthy people from all over the world have bought into the Premier League in recent years, including everyone from Saudi Arabia’s Public Investment Fund (PIF), which bought Newcastle United, to Russian oligarch Roman Abramovich, who owned Chelsea until sanctions forced him out. Several owners of American teams, including John Henry (Boston Red Sox and Liverpool), Josh Harris (Philadelphia 76ers and Crystal Palace), and Stan Kroenke (Los Angeles Rams and Arsenal) have also bought clubs in the top tier of English football.