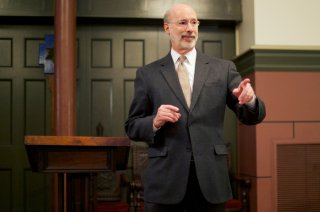 Over the course of the years-long, economically crippling Covid-19 pandemic, Congress has taken action to approve three much-needed direct stimulus payments to most Americans.

But ever since the American Rescue Plan in March 2021 approved the most recent third stimulus check, there only has been plenty of talk but no concrete action to green-light more such payments. It is against this backdrop in which several states have already taken the initiative to help out their respective residents.

One state that fits this profile is Pennsylvania, where Gov. Tom Wolf once again pushed for the Republican-led General Assembly to pass legislation for the American Rescue Plan Act (ARPA)-funded $500 million PA Opportunity Program—which would send ​direct payments of up to $2,000 to ​millions of Pennsylvanians.

“I first introduced this plan four months ago. A lot has changed since then, from inflation to price increases to a war in Ukraine. Pennsylvanians need our support even more today than they did in February. Under my plan, Pennsylvania households earning $80,000 or less will get up to $2,000, and they can use the money for whatever they need,” Wolf said in a statement. “This plan will help Pennsylvanians get back on their feet right now—but I also want to look ahead, to the long-term solutions that will help keep Pennsylvanians on the path to prosperity,” he continued.

Last February, Wolf unveiled a $1.7 billion proposal for Pennsylvania’s $2 billion in federal ARPA dollars. While Democratic lawmakers have since introduced legislation—Senate Bill 1619 and House Bill 2531—to support the governor’s PA Opportunity Program, the General Assembly has been slow to act on committing the federal funding or introduce a plan for the money. If there is continued inaction by the legislature, the federal funds will be returned to Washington by December 31, 2024.

Wolf, along with Rep. Patty Kim (D-PA), has also reiterated calls for the General Assembly to raise the minimum wage to $12 per hour by July 1, with a pathway to $15 per hour by 2028. “During recent months, the cost of housing, utilities, energy, transportation and even groceries have all increased. Almost all essential costs have risen across the board in Pennsylvania, except for the cost of labor,” Kim said in a statement.

“In Pennsylvania, unlike all our neighboring states, the minimum wage has not budged since 2009. This scenario all but guarantees severe and crippling economic hardships in Pennsylvania for people earning the lowest income. We are looking at a scenario where Pennsylvania’s working poor—those people working 40 or more hours a week—will still be struggling just to survive,” she added.