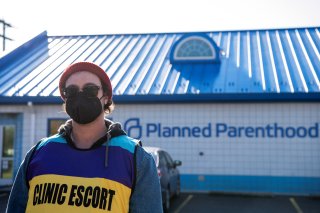 In the roughly 100 days since the Supreme Court struck down Roe v. Wade, the 1973 landmark decision that established the constitutional right to abortion, sixty-six clinics across fifteen states have stopped providing the procedure, according to a new Politico report.

The data, compiled by the Guttmacher Institute, an abortion-rights advocacy and research group, further revealed that of those sixty-six clinics, forty still offer non-abortion services, while twenty-six have closed down.

Politico noted that as of Wednesday, the fourteen states where abortions are almost entirely unavailable are Alabama, Arizona, Arkansas, Idaho, Kentucky, Louisiana, Mississippi, Missouri, Oklahoma, South Dakota, Tennessee, Texas, West Virginia, and Wisconsin. Meanwhile, abortion access is significantly limited in a fifteenth state, Georgia, where the procedure is allowed until the detection of fetal cardiac activity, generally occurring around the sixth week of pregnancy.

Currently, abortion access remains in limbo in seven other states, including Indiana, South Carolina, and Ohio.

According to Guttmacher Institute’s analysis, the fourteen states were responsible for more than 125,000 abortions in 2020, while more than 41,000 abortions were performed in Georgia in the same year.

“Even before Roe was overturned, getting an abortion was difficult or outright impossible for many people, especially those who were already facing steep barriers to accessing health care, including people with low incomes, Black and Brown people, immigrants, young people, those with disabilities and rural populations,” Rachel Jones, principal research scientist at the Guttmacher Institute, said in a statement.

“These inequities are likely to worsen as clinic-based abortion care disappears in many states, many of them clustered in regions like the South,” she continued.

On Tuesday, per the Washington Post, President Joe Biden and Vice President Kamala Harris slammed Republican leaders who have been pushing to roll back abortion access in their respective states.

“Today, extremist so-called leaders are attacking the freedom and liberty of millions of women at a state level. In Arizona, for example, a judge recently upheld an 1864—that’s not a statute, that’s the year—1864 abortion ban with no exceptions for rape or incest,” Harris said during a meeting of the White House Task Force on Reproductive Healthcare Access. “That was 173 years ago. And make note that at that time women also did not have the right to vote.”

Biden took particular issue with the University of Idaho over its new guidance against offering birth control to students.

“Folks, what century are we in? What are we doing? I respect everyone’s view on this—personal decision they make. But, my lord, we’re talking about contraception here. It shouldn’t be that controversial,” he said. “This is what it looks like when you start to take away the right of privacy.”