Biden, Harris Go on the Offensive Over Abortion Restrictions 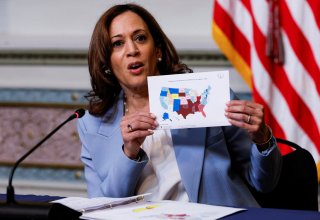 President Joe Biden and Vice President Kamala Harris on Tuesday took direct aim at Republicans who are pushing to roll back access to abortion in their respective states, the Washington Post reported.

“Today, extremist so-called leaders are attacking the freedom and liberty of millions of women at a state level. In Arizona, for example, a judge recently upheld an 1864—that’s not a statute, that’s the year—1864 abortion ban with no exceptions for rape or incest,” Harris said during a meeting of the White House Task Force on Reproductive Healthcare Access.

“That was 173 years ago. And make note that at that time women also did not have the right to vote,” she continued.

According to the White House, more than a dozen Republican-led states have effectively banned abortions since the Supreme Court overturned Roe v. Wade a hundred days ago. The ruling has affected roughly thirty million women of reproductive age, twenty-two million of whom cannot access abortion after six weeks.

“Extreme abortion bans are having consequences that extend beyond abortion, including reports of women being denied access to necessary prescriptions and contraception at pharmacies and on college campuses,” Jennifer Klein, director of the White House Gender Policy Council, wrote in a memo.

Meanwhile, Biden slammed the University of Idaho over its new guidance against offering birth control for students, after a sweeping abortion ban was enacted across the state.

“Folks, what century are we in? What are we doing? I respect everyone’s view on this—personal decision they make. But, my lord, we’re talking about contraception here. It shouldn’t be that controversial,” he said.

“This is what it looks like when you start to take away the right of privacy,” the president continued.

Biden also warned other universities not to sign off on similar policies. “My message to any other colleges considering enacting policies like this: Don’t. Please don’t. We’re not going to sit by and let Republicans throughout the country enact extreme policies to threaten access to basic health care, and that’s why we’re all here today,” he said.

Biden later confirmed that he directed Secretary of Education Miguel Cardona to look into the policies.

“Today I want to be clear to college leaders in America: Access to contraception should not be in question,” Cardona said.