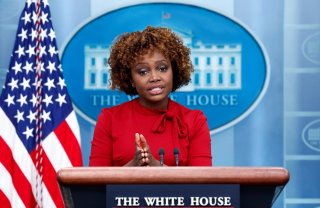 The White House slammed an Arizona judge’s ruling on Friday that said that a near-total abortion ban, which can be traced back to 1864 before Arizona was even a U.S. state, must now be enforced.

The stricter law, prohibiting abortion in all cases except for when the life of the mother is at risk, was blocked by a court injunction in 1973 shortly after the Supreme Court, in Roe v. Wade, determined that there was a constitutional right to abortion. The judge’s decision came a day before a fifteen-week ban on abortion was slated to go into effect in the state.

In a statement released on Saturday, White House press secretary Karine Jean-Pierre contended that the potential consequences of the ruling are “catastrophic, dangerous, and unacceptable.”

“If this decision stands, health care providers would face imprisonment of up to five years for fulfilling their duty of care; survivors of rape and incest would be forced to bear the children of their assaulters; and women with medical conditions would face dire health risks,” she continued.

“Make no mistake: this backwards decision exemplifies the disturbing trend across the country of Republican officials at the local and national level dead-set on stripping women of their rights, including through Senator [Lindsey] Graham’s (R-SC) proposed national abortion ban. The contrast between the President and his focus on moving the country forward and Republican officials’ obsession with taking our country backwards could not be more stark. The President and Vice President will continue to push Congress to codify Roe to protect women’s access to abortion and health care,” she added.

Graham’s Protecting Pain-Capable Unborn Children from Late-Term Abortions Act includes exceptions for abortions that are necessary to save the life of the mother or when the pregnancy is the result of rape or incest. It would also not affect state laws that are already more restrictive. Yet, the bill has nearly no chance of becoming law in the Democratic-controlled Congress.

Meanwhile, as reported by The Hill, Sen. Kyrsten Sinema (D-AZ) heavily criticized the abortion ban, saying that it removes the “basic rights” of women.

“A woman’s health care decisions should be between her, her family, and her doctor,” she wrote on Twitter on Saturday. “Today’s decision removes basic rights Arizona women have relied upon for over a century and endangers their health, safety, and well-being,” she added.

“I won’t stop until we restore abortion rights so my granddaughter can have the same freedoms my grandmother did,” he tweeted.