Report: Trump Offered to Give the West Bank to Jordan’s King 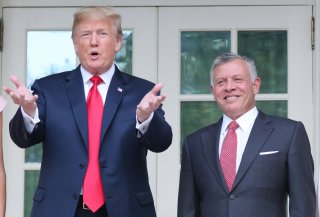 Virtually every other week for the last year and a half, there’s been a new book about the Trump administration. Some are authored by journalists, both sympathetic and not, while others are by former White House staffers. Nevertheless, all seem to offer surprising stories that were somehow never reported as the events happened.

The latest of these books contains one of the most shocking claims from the Trump era: former President Donald Trump reportedly offered the king of Jordan the West Bank.

According to the Washington Post, the story comes from The Divider: Trump in the White House 2017-2021, an upcoming book authored by New York Times correspondent Peter Baker and New Yorker staff writer Susan Glasser.

The book claims that in January 2018, Trump offered King Abdullah II of Jordan the West Bank, the disputed territory that was held by Jordan until Israel occupied it following the Six-Day War in 1967. The West Bank contains a large population of Palestinians, who are generally opposed to the Jordanian monarchy.

Furthermore, in all of the many years of negotiations over who will control which parts of the West Bank in a final-status agreement, Jordanian control over the territory has generally not been considered. What’s more, the West Bank doesn’t belong to the United States, so the president would not be able to offer it to another country.

“I thought I was having a heart attack,” the king reportedly told an American friend. “I couldn’t breathe. I was bent doubled-over.”

A report in the Forward provided more details about Trump-era diplomacy, including the revelation that the president's son-in-law, Jared Kushner, had “committed to personally cover any potential costs of the White House signing ceremony” for the Abraham Accords after First Lady Melania Trump “was worried about the grass.” The White House lawn had just been re-sodded shortly before the ceremony, and Kushner offered to pay the $80,000 it would cost to sod it again, although the grass made it through the event without being damaged.

“Kushner and his team were dumbfounded,” the authors wrote of that episode. “After all the delicate bargaining to bring Israelis and Arabs together, resolving part of the world’s greatest geopolitical turf battle, the final obstacle to their day of celebration would be the actual turf?”