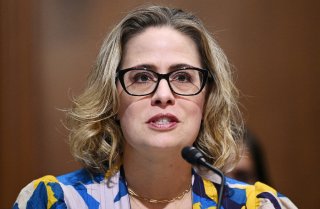 Sen. Kyrsten Sinema (D-AZ), the lone holdout on the Inflation Reduction Act among the fifty-member Senate Democratic Caucus, continues to refuse to tip her hand one way or the other on the legislation, according to a new CNN report.

In shedding some light on her stance, the news outlet said that Sinema has argued in private conversations that the new tax increases in the bill could potentially hurt companies in her home state of Arizona.

The proposed legislation would impose 15 percent minimum tax on corporations with profits of more than $1 billion. Additionally, it aims to close the so-called carried interest loophole, which has long been a goal of Democratic tax reformers. It is a longstanding tax break that enables many private equity and hedge fund financiers to pay a lower capital gains tax rate on much of their income, instead of the higher income tax rate paid by wage earners.

In a private call with business groups on Tuesday, Sinema asked a question about the bill’s 15 percent tax on corporations. “Is this written in a way that’s bad?” Sinema asked, according to Danny Seiden, president of the Arizona Chamber of Commerce, who relayed the call to CNN.

“It gave me hope that she’s willing to open this up and maybe make it better,” Seiden said.

Sinema has also expressed concerns about the carried interest loophole. CNN said that Sinema has told top Democrats that she wants that particular provision out of the bill, according to a source familiar with the matter.

Republicans have vociferously slammed the $790 billion legislation, and the GOP is now counting on Sinema to reject it.

“She’s analyzing it,” Senate Minority Whip John Thune (R-SD) said of Sinema. “Keeps her own counsel, I think as most of you know, and usually comes to her own decisions, pretty independent of any pressure that she might get from either side. So you know, I think she’s going through that process right now,” Thune added.

Meanwhile, Sen. Joe Manchin (D-WV) confirmed during a Wednesday appearance on MSNBC that he and Sinema have been in discussions about the details of the legislation.

“We did have a nice conversation and exchanged papers back and forth to make sure we understand everything, and she understands where we're coming from,” he said.

“She'll look at all of this and make her own decision. So hopefully—there's a lot of good things in there, and she's working very hard over the past on a lot of the issues that we're talking about,” Manchin continued.

“So, we'll just have to see how it goes, but we're talking,” he added.