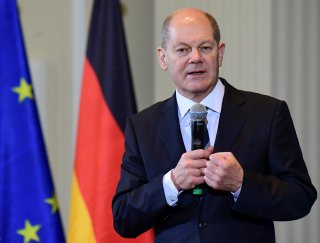 Scholz, 63, was sworn in after the conclusion of negotiations between three governing parties: the center-left Social Democratic Party, the centrist Free Democratic Party (FDP), and the left-wing Green Party. The color scheme of the three parties (red for the SPD, yellow for the FDP, and green for the Green Party) has led commentators to describe it as a “traffic-light coalition.”

The center-right Christian Democratic Union, Merkel’s party, remains in opposition, as does the far-left Der Linke party and the far-right Alternative for Germany (AfD). Merkel stepped down from the CDU’s leadership in 2018 and is now retired; the party has been led by Armin Laschet since January 2021.

Scholz previously served as vice-chancellor and Minister of Finance under Merkel. He was elected to succeed her within the Bundestag, Germany’s parliament, on Wednesday and was formally sworn in later in the day.

Scholz has emphasized the importance of continuity in Germany’s government, citing major ongoing challenges including the fourth wave of the coronavirus, including potential complications caused by the emergence of the highly infectious “Omicron” variant. Also, Scholz has pushed to maintain continuity in Germany’s foreign policy; Berlin’s economy is the largest within the European Union, and the country has traditionally played an outsized role in the bloc’s political decisionmaking process. He emphasized that this role would be particularly important with regard to the EU’s relationship with Russia, which has been put under strain by Russian troops’ growing presence on its border with Ukraine.

In part because of his alliance with the Greens, Scholz has also pushed for increased efforts to combat climate change, including advancing its commitment to end coal power production in Germany from 2038 to 2030. Additionally, Scholz has advocated for traditional liberal priorities, including lowering the country’s voting age to sixteen, reforming German citizenship laws, legalizing marijuana, and raising the federal minimum wage to €12 ($13.50) per hour.

French president Emmanuel Macron and President of the European Commission Ursula von der Leyen congratulated Scholz after his win, while Russian president Vladimir Putin and Chinese president Xi Jinping each welcomed his election and indicated their interest in expanding bilateral ties with Berlin.