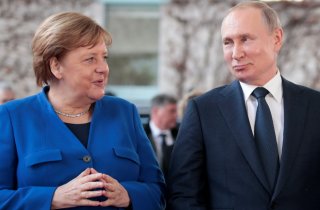 Berlin bristles with negotiations these days. With federal elections held in late September, one thing is certain about future German policy: After sixteen years in power, Angela Merkel will leave office, and a new chancellor will take over.

The transition to Joe Biden’s administration earlier this year showed how new leadership begets new policy—including toward Russia. But how will Germany, hitherto the United States’ key ally in its dealings with the Kremlin, behave after the Merkeldämmerung?

Concern about a German-Russian rapprochement is seemingly justified. After all, Merkel’s predecessor, Gerhard Schröder, became a personal friend of Vladimir Putin during his tenure. Just before leaving office, Schröder greenlighted Nord Stream, a gas pipeline directly connecting Germany and Russia, despite protests from NATO allies such as Poland and the Baltic States. Schröder then transitioned into positions with Russia’s major state-controlled energy companies directly after leaving office.

In stark contrast, Merkel has never had much sympathy for Moscow. For example, as an aspiring young scientist in Communist Eastern Germany, she declined to spy for East Germany’s secret police.

Much later, under her leadership, Berlin organized sanctions from across the European Union against Russia. Germany also became one of the main contributors to NATO’s Operation “Enhanced Forward Presence” to reassure NATO’s Baltic members after Russia’s aggression against Ukraine in 2014.

Fast forward to the 2021 elections: Schröder’s party, the Social Democrats (SPD), carried the plurality of votes. SPD candidate Olaf Scholz will likely be the next chancellor. Scholz worked closely with Schröder as the SPD’s general secretary until 2004.

The Kremlin tried to influence the outcome of the elections. Russian-controlled media supported Alternative for Germany (AfD), a right-wing party in favor of closer German-Russian ties. Russia also sought to discredit the Greens, which oppose the Nord Stream 2 project and call for a firmer stance on human rights and international law. Hackers probably connected to the Russian state have been active in Germany at least since March 2021.

However, German policy toward Russia is unlikely to change in any major way, notwithstanding Merkel’s departure. This is mainly for five reasons.

First, the next government will be formed by a coalition. This will give sway to status quo parties. Due to the vote counts and Germany’s parliamentary system, only three-party coalitions are feasible–with six parties represented in the Bundestag.

Current negotiations signify that the somewhat Kremlin-friendly AfD and Die Linke parties will not be involved whatsoever, due to their association with Germany’s undemocratic pasts. Thus, Scholz could only become chancellor with the combined support of two of the three remaining parties: the Greens, the FDP, or Merkel’s Union. All of these oppose rapprochement.

Second, the Social Democrats themselves are far from being a Kremlin-friendly party nowadays. The SPD had been Merkel’s coalition partner for most of her tenure, with the exception of 2009-2013. Social Democrats held the positions of vice-chancellor and foreign minister when Germany slapped sanctions on Russia and sent its own troops to defend NATO allies in the east in 2014. Scholz’s recent public statements confirm and re-emphasize existing policy toward Russia.

Putin’s pal Schröder has little sway and few allies in today’s SPD, holding no political office. After the poisoning of Russian oppositionist Alexei Navalny, a slight majority of Social Democrats even wanted Schröder to step down from his positions in Russian state-owned businesses.

Third, German security policy is marked by continuity. Germany continued to oppose Russia even when President Donald Trump attacked NATO and Berlin while seeking favor with Putin. Germany’s ongoing contributions to sanctions and NATO operations are undergirded by a deep consensus in the German populace and elite that Russia’s behavior is threatening and unacceptable.

Fourth, Russia itself seems to expect continuity in German policy. Despite the Russian media campaign and hacking, there is no evidence of any major Russian election interference on the scale of Ukraine in 2004, let alone the United States in 2016.

Fifth, ongoing negotiations point towards continuity. Currently, the most likely future ruling coalition consists of the SPD, Greens, and FDP. They recently published the results of their ongoing coalition talks.

The paper does not mention Russia once. Rather, it puts great emphasis on protecting democracy and human rights, anchoring German policy firmly within NATO and the EU. Despite the Greens’ earlier demands to cancel Nord Stream 2, the paper simply states that Germany will seek to diversify its energy supplies and adhere to EU energy law.

Thus, even though Merkel oversaw Germany’s Russia policy for the last sixteen years, her impending departure is unlikely to change Berlin’s approach toward Moscow.

Jonas J. Driedger is a DAAD Fellow at the Henry A. Kissinger Center for Global Affairs, School of Advanced International Studies (SAIS) in Washington, D.C. He specializes in foreign and security policy with a focus on Germany, Russia, and transatlantic relations.