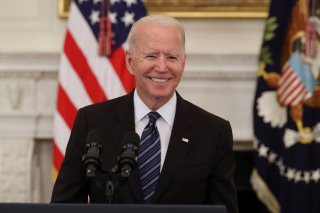 Child Trends published an analysis of the data, which noted that “the magnitude of this decline in child poverty is unequaled in the history of poverty measurement in the United States."

The report explained a few reasons why child poverty has declined.

“Lower unemployment rates, increases in single mothers’ labor force participation, and increases in state minimum wages explained about 33 percent of the overall decline in child poverty from 1993 to 2019, but healthy economic conditions alone were not sufficient to protect children from poverty,” the study concluded.

There was another big reason, however.

“The social safety net was responsible for much of the decline in child poverty from 1993 to 2019, cutting poverty by 9 percent in 1993 and by 44 percent in 2019—tripling the number of children protected from poverty over this time.”

As for 2021 specifically, there was one big change: The temporary, expanded child tax credit, which passed early that year but expired at the end of 2021 and has not been reinstated.

“The 2021 Child Tax Credit (CTC) and Advance Child Tax Credit represent examples of programs based on children’s needs, in two ways,” the study said. “First, the very premise of the 2021 expansion of the CTC was based on research that shows the importance of economic stability for child well-being and the value of investing in the early childhood years (a period of intensive brain development). The Advance CTC provided families with children predictable monthly payments of up to $250 per child for children ages 6 to 17, and up to $300 per child under age 6. Second, its eligibility requirements were based on the child’s citizenship status, not that of the parent.”