Trump: ‘Inconceivable’ for Biden to Run Again in 2024 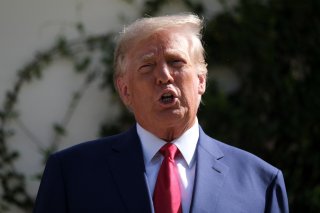 Former President Donald Trump told Fox News in an interview after his rally in Dayton, Ohio, on Monday evening that “it is inconceivable” for President Joe Biden to run for the nation’s highest office again in 2024.

“I don’t think he runs. It is inconceivable,” he said.

In September, Biden, who at seventy-nine is the oldest president in U.S. history, said in an interview with CBS News’ 60 Minutes that he intends to run for re-election in 2024 but has not yet made a “firm decision.”

“It’s much too early to make that kind of decision. I’m a great respecter of fate. And so, what I’m doing is I’m doing my job. I’m gonna do that job. And within the timeframe that makes sense after this next election cycle here, going into next year, make a judgment on what to do,” he said.

“Look, my intention as I said to begin with is that I would run again. But it’s just an intention. But is it a firm decision that I run again? That remains to be seen,” he continued.

Late last month, Biden, expressed similar sentiments on MSNBC, saying that while he has not made a formal decision about running for president in 2024, it is his “intention” to do so.

“The reason I’m not making a judgment about formally running or not running, once I make that judgment, a whole series of regulations kick in and I have to be—I treat myself as a candidate from that moment on,” he said.

“I have not made that formal decision, but it’s my intention—my intention to run again. And we have time to make that decision,” he added.

Meanwhile, Trump himself seemingly confirmed his 2024 White House run on Monday when he said that he will make a “very big announcement” on November 15, Politico reported.

“I’m going to be making a very big announcement on Tuesday, November 15 at Mar-a-Lago in Palm Beach, Florida,” Trump said during his rally in Ohio.

Trump has also gone on the offensive against potential 2024 rival Florida Gov. Ron DeSantis, whose landslide victory in Tuesday’s midterm elections likely sets the stage for his own 2024 White House run. He told Fox News on Tuesday that DeSantis shouldn’t even consider entering the presidential race.