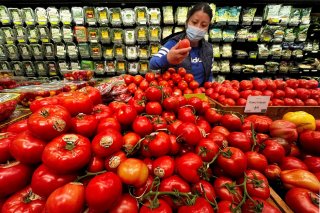 Americans should brace for even higher food prices at grocery stores and restaurants.

According to the U.S. Department of Agriculture (USDA), the overall price of food is projected to increase between 3 and 4 percent after surging well over 8 percent year-over-year, the largest annual jump in four decades.

According to Fox 11 in Los Angeles, the USDA Food Price Outlook for 2022 said that “the ranges for 11 food categories, as well as six aggregate categories, were revised upward this month.”

The only food category that saw a small price decrease was fresh vegetables.

Meanwhile, restaurants aren’t immune to inflation, either. Restaurant menu items, which have already climbed nearly 7 percent year-over-year, are now expected to increase between 5.5 and 6.5 percent.

Russia’s invasion of Ukraine is also contributing to inflation. According to The Hill, if the conflict continues on for the foreseeable future, the cost of bread, cereal, pizza, pasta, and other foods could stay on a northward trajectory.

“In the next few months, if Ukrainian farmers aren’t able to get their crops in the ground as we go into the springtime, and we’re looking at an entire year without a quarter of the world’s wheat supply, it’s going to have a significant impact on prices,” Robb MacKie, president and CEO of the American Bakers Association, told the news site.

In addition, MacKie said that the rising price of natural gas—the primary fuel used to bake common food products—could also hurt American consumers. According to The Hill, MacKie’s trade group is pushing the White House to stave off increased biofuel mandates so that the nation’s supply of cooking oil can be raised to higher levels.

Ways to Save Money at Grocery Stores

In an effort to help Americans keep their grocery bills down, some experts are now touting the cost-saving benefits of shopping around, making shopping lists, and searching for promotions and deals.

“When it comes to saving money on groceries, consumers have many options, but it does require making changes to our routines and some savvy decision making,” Carman Allison at NielsenIQ told CNN Business.

For Edgar Dworsky, a former assistant attorney general in Massachusetts and founder of Consumer World, landing the best deals on food can often be achieved by comparing prices on specific products at different stores.

“I do not have allegiance to any one supermarket,” he told CNN. “If you've got the best price, you’re my best friend at that moment.”

And if he finds a great deal, he will likely stock up. “When apple juice is 99 cents a gallon, I will buy a case or two,” he said.

Also, don’t forget to sign up for a loyalty card, which often features special deals just for members. If you’re not using it, “you're throwing money away,” Dworsky concluded.