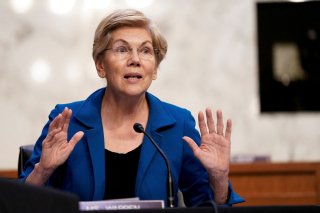 Sen. Elizabeth Warren (D-MA) on Tuesday accused one of the nation's largest student loan servicers of misleading its borrowers, according to a new Axios report.

Warren and Rep. Ayanna Pressley (D-MA) confirmed that they sent a letter to Navient demanding answers regarding “troubling reports” that it is “attempting to scam borrowers out of student debt relief.” The servicer allegedly pushed its borrowers to refinance their federal loans into private ones, which would make them ineligible for the forgiveness program green-lighted by the Biden administration late last month.

“If these reports are accurate, they reveal a particularly nefarious and harmful last-ditch tactic by Navient to profiteer off of the hardship of borrowers that finally are within grasping distance of obtaining relief from their abusive student loans,” the two lawmakers said in the letter.

During Tuesday’s Senate Banking, Housing and Urban Affairs Committee hearing, Warren contended that “while families are breathing a sigh of relief, corporations that made billions of dollars off a broken student loan system are now busily laying new traps in a shameless last-ditch effort to try to line their pockets.”

“Navient, one of the world’s largest and worst loan servicers, is now leading the way,” she continued. “It appears that instead of sending borrowers information to help them get the cancellation that they may be entitled to, Navient pushed borrowers toward loans that could at best complicate their ability to get cancellation.”

In response to the accusations, Navient told the Hill that the potential repercussions of refinancing were made clear to borrowers.

Under Biden’s student loan relief plan, those with federal student loans who make under $125,000 annually, or couples earning less than $250,000, qualify for up to $10,000 in forgiveness. And if a borrower received a Pell Grant to attend college, they could potentially get up to $20,000 in relief. Approximately 60 percent of all federal student loan borrowers received Pell Grants, according to the White House.

Furthermore, the student loan announcement extended the moratorium on repayments till January and created a new income-driven repayment plan to assist people who have a difficult time making large monthly payments.