White House: ‘Clear’ That ‘We Are Not in a Recession’ 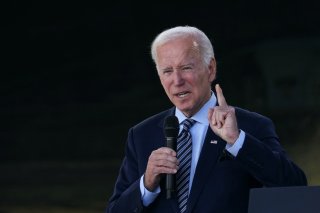 A day after the Federal Reserve signed off on a fourth-consecutive seventy-five-basis-point interest rate hike to slow key areas of the economy and tame decades-high inflation, White House chief of staff Ron Klain on Thursday asserted that current economic data is proving that the country is not mired in a recession, Reuters reported.

“We are not in a recession. I want to be really, really clear on that,” President Joe Biden’s top aide told MSNBC in an interview when asked what the White House is doing to prepare for a possible economic downturn.

“Unemployment claims remain at a historical low. … The economy is growing. It is strong. It is creating jobs,” he continued.

White House press secretary Karine Jean-Pierre expressed similar sentiments on the same network. “We are not—there are no meetings or anything happening like that in preparing for a recession because … look, what we’re seeing right now is a strong labor market,” she said.

However, Klain admitted that decades-high inflation poses the “biggest problem” and bringing that down remains the number one priority of the White House.

“Our mission here at the White House is to continue that kind of economic growth, continue the job creation, continue to move the economy forward and to tackle the biggest problem we have in the economy right now, frankly, which is inflation and bringing down prices of everyday things that hit people, really hit people hard,” he said.

Meanwhile, as reported by Fox Business, Harvard economist Kenneth Rogoff on Thursday issued a dire warning about the U.S. economy.

“You really have to look at the world, which is in bad shape,” he told Mornings with Maria. “So, it's very hard for the United States to resist that. I worry that not only we’re going to get a mild recession, I think the chances that we’ve got a significant recession are really pretty high.”

Rogoff also predicted that the relatively strong labor sector will soon catch up with the rate hikes, as futures markets are pricing in the greatest odds of a peak rate of 5 percent to 5.25 percent sometime in the first half of 2023.

“Productivity is just terrible, and is it that really wages are higher than they seem because of changes in working conditions, employers are distracted by pressures to take on social issues, or just a global phenomenon? I don’t know what it is,” he said.