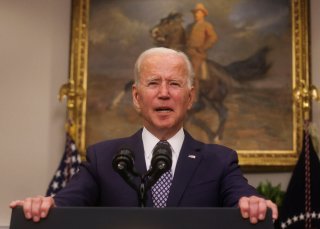 A group of lawmakers in the House of Representatives has expressed concerns that President Joe Biden’s sweeping student-loan forgiveness plan will disincentivize Americans from joining the military, according to a new Insider report.

Nineteen GOP lawmakers last week wrote a letter to the White House saying that they are worried about the “unintended consequences” of Biden’s student loan decision last month, particularly “the negative impact” they claim it will “surely have on our nation’s military and their ability to recruit and retain” talent.

“Some of the most successful recruiting incentives for the military are the GI Bill and student loan forgiveness programs. The idea that the military will pay for schooling during or after completion of a service obligation is a driving factor in many individuals’ decision to join one of the services. A recent estimate showed that as many as 178,000 servicemembers were eligible for some type of forgiveness,” the lawmakers wrote.

“By forgiving such a wide swath of loans for borrowers, you are removing any leverage the Department of Defense maintained as one of the fastest and easiest ways to pay for higher education. We recognize the loan forgiveness programs have issues of their own, but this remains a top recruiting incentive,” they continued.

The lawmakers added that only 23 percent of the U.S. population is eligible to serve in the military and, at the end of last month, the Army had only reached 66 percent of its recruiting goals for 2022.

“It is no secret that each of the services continues to battle hardships in recruiting and now these problems will be exacerbated by removing the uniqueness of this benefit,” they said.

“As the services try to adopt unique approaches to tackle their recruiting challenges, including historic bonuses, it feels like their legs are being cut out from underneath them,” they added.

Meanwhile, Rep. Don Bacon (R-NE), a co-signer on the letter, tweeted on Monday that Biden’s “deeply flawed and unfair” student-loan forgiveness plan will bring about new challenges “at the precise moment we are experiencing a crisis in military recruiting.”

Under Biden’s student-loan relief plan, those with federal student loans who make under $125,000 annually, or couples earning less than $250,000, qualify for up to $10,000 in forgiveness. And if a borrower received a Pell Grant to attend college, they could potentially get up to $20,000 in relief. Approximately 60 percent of all federal student loan borrowers received Pell Grants, according to the White House.

Additionally, the student loan announcement extended the moratorium on repayments until January and created a new income-driven repayment plan designed to assist people who have a difficult time making large monthly payments.