This A-10 Warthog Movie Never Saw the Light of Day 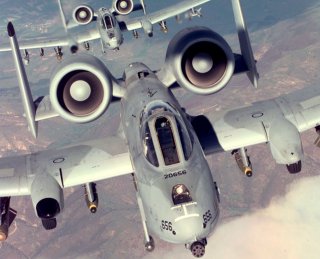 Here's What You Need to Remember: A short film that the Air Force tried to suppress reveals why axing the A-10 is a bad idea.

The U.S. Air Force more than once has practically begged Congress to allow it to retire its roughly 280 A-10 Warthogs, those venerable twin-jet attackers that saved countless soldiers’ lives in Iraq and Afghanistan—and which more recently returned to Iraq to help battle Islamic State.

A short film that the Air Force tried to suppress reveals why axing the A-10 is a bad idea.

Literally for decades—since well before the 1991 Iraq war—the U.S. Air Force has been trying to get rid of the A-10 Warthog close air support aircraft. The A-10’s spectacular performance in four wars in Iraq—twice—plus Kosovo and Afghanistan has frustrated these efforts.

In those conflicts, the A-10 outperformed all other U.S. aircraft in killing tanks and other vehicles and supporting infantry engaged in combat-at both very short—“danger close”—and longer ranges.

The A-10 has also excelled in combat search-and-rescue for downed pilots—such as for the pilot of the F-117 stealth fighter shot down in the Kosovo war—and in battlefield interdiction against conventional forces with modern air defenses, as well as the destruction of those enemy air defenses and shooting down enemy helicopters.

Official Air Force cost data show the A-10 to be the cheapest combat aircraft in its inventory to operate, notwithstanding an expensive program to give the A-10 new wings and electronics to remain viable until 2030.

And yet, the Air Force command has persisted, deciding in 2013 and again in 2020 that it would exploit flattening budgets to “divest” all, or part, of its inventory of active and reserve A-10s.

The flying branch in 2013 argued that the new F-35 stealth fighter is an adequate replacement for the low- and slow-flying Warthog—and the Air Force should spend its money buying F-35s instead of maintaining the A-10s and their unique 30-millimeter cannons.

In fact, the F-35 is too fast, too flimsy and years away from front-line service. But the Air Force has its mind made up. And as part of its campaign to kill the A-10, the flying branch in 2014 declined to release a short documentary that its own public affairs practitioners produced about the Warthog’s lifesaving missions in Afghanistan.

Grunts in the Sky eventually leaked.

It’s a healthy reminder that the A-10 is an awesome warplane. Its pilots love it. And so do the ground troops who depend on its support.

Why did the Air Force suppress the A-10 docu when it had no problem releasing a similar short film about the F-16? Maybe it’s because there are hundreds or even thousands of A-10 pilots and maintainers who are passionate about saving their plane. And as former Air Force gunship pilot Bob Seifert pointed out recently, “The USAF is harder on internal ideas than it is on evil insurgents.”

Fortunately, Congress in 2014 had none of the Air Force’s nonsense. Legislators required the flying branch to keep the A-10s. The Air Force in its 2021 budget proposal asked again to begin shuttering A-10 squadrons. It’s unclear whether Congress will approve the cuts.