In 2019, the Army Fired a Howitzer from an Amphibious Landing Craft 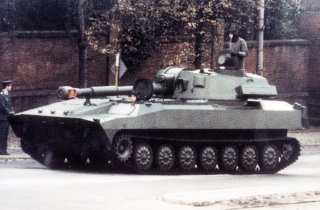 Here’s What You Need to Remember: The 2S1 was exported during the Cold War to Warsaw Pact nations including Czechoslovakia, Hungary and Romania. Since the end of the Cold War most of those were phased out. Its largest operators in recent years were the Ukraine, Belarus and India. Even in Russia the Gvozdika has largely been replaced by the 152mm 2S19 MSTA, which entered service in 1989.

In 2019, the Virginia Army National Guard conducted what was described as an extremely unusual artillery exercise that involved the firing of a 105mm M118 howitzer from on board a U.S. Army landing craft. The Drive reported at the time that the operation was to highlight how mobile fire support could be provided during amphibious operations and during missions in littoral environments.

However, it remains a most unusual example of Cold War weapons technology that offered a solution for a problem few nations saw existing.