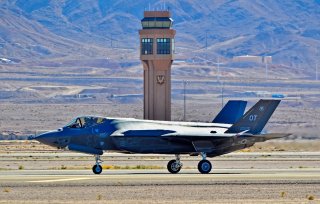 Here's What You Need to Remember: A full-rate production will be the final seal of approval from the DoD to American taxpayers as well as foreign customers that the fifth-generation advanced stealth jet fighter has been fully tested. More importantly, this approval would mean the aircraft has been deemed effective against threats from potential peer adversaries, while it is also able to meet its maintenance goals and production quotas.

The Lockheed Martin F-35 Lightning II Joint Strike Fighter may be one of the most advanced aircraft ever produced, but there is little denying that it has had its share of problems. The program has been plagued by numerous delays, and this week it was reported that yet again the Department of Defense (DoD) will be forced to hold off on bringing the F-35 to a full-rate of production.

While the ongoing novel coronavirus pandemic was noted for slowdowns in the program this past August, the delays have been ongoing and even a year ago the Pentagon expected up to thirteen months of delays. This was necessary for the DoD to conduct more simulations on how the jet would perform in demanding combat environments prior to committing to the full production contract.

In August the DoD announced it believed that the F-35 would be ready for a full-rate production decision by March 2021—three months longer than was expected in October 2019.

There is some irony of course, given that the F-35 has been operational since 2016, and during that time it has engaged in numerous combat missions with aircraft flown by the United States and its allies equipped with the jet.

However, a test such as the Joint Simulation Environment (JSE) exercise, which was supposed to be held at Naval Air Station Patuxent River at the end of August, is an example of a test that demonstrates how the aircraft could perform against the toughest air defenses and aerial adversaries flown by “peer adversaries” such as China and Russia.

The month-long JSE would use a full-size replica of the F-35 cockpit rigged with its combat systems, sensors, and electronics. The simulated exercise, which was supposed to be ready three years ago, has been delayed due to the complex software issues a Government Accountability Office (GAO) report noted this past April.

The test has now been delayed until sometime next year—which could push back the full-rate production decision even more.

According to a report from Bloomberg, the F-35 program office “currently estimates” that the new test delay “will not support a March 2021 date” for Congress to receive a final report from the Pentagon. Any report on the aircraft’s capability remains subject to the tests. Should former Vice President Joe Biden win the election, the F-35 milestone could be an incoming defense secretary’s first major acquisition decisions.

A full-rate production will be the final seal of approval from the DoD to American taxpayers as well as foreign customers that the fifth-generation advanced stealth jet fighter has been fully tested. More importantly, this approval would mean the aircraft has been deemed effective against threats from potential peer adversaries, while it is also able to meet its maintenance goals and production quotas.

For now, the F-35’s production will continue in the “low-rate initial production” that is in accordance with Congressional authorization and appropriation. As noted by Defense News, the full-rate production decision is at this point a largely symbolic one, as the DoD has been acquiring the aircraft in numbers that would otherwise qualify as full-rate production for most aircraft procurement programs. To date 134 F-35s were delivered to the United States and international customers in 2019.

Lockheed Martin has reported that it would deliver 121 of the jets this year, which would be twenty short of the 141 forecast. These delays are more due to manufacturing slowdowns across the supply chain this spring when the pandemic impacted the aerospace industry. The defense contractor has said it would ramp up production to some fourteen of the aircraft per month, with a goal to deliver upwards of 160 jets next year.

However, the issue of the delay is almost equally symbolic as the JSE milestone is considered an important show of confidence in the program.