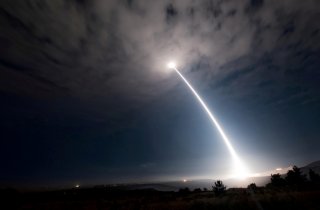 Here's What You Need to Know: Air Force and industry developers say the new GBSD will be built for longevity, sustainment and a decades-long service life.

It is a concern that has been lingering for quite some time: what happens if the 1960s-era Minuteman III ages out before the 2029 planned arrival of the new GBSD? The United States could be faced with the prospect of simply having no land-based ICBMs.

Adm. Charles Richard, the commander of U.S. Strategic Command, told reporters he believes that continued maintenance and upgrades of the Minuteman III appear to be on track to successfully bridge the gap, but not without substantial risk.

“You can't take stuff that you got back at the end of the Cold War and to think somehow forever you can continue to make it work, right? There's a point where it becomes not cost-effective to do that, and there's another point out there, where it's not possible at all,”  Richard said, according to a Pentagon transcript of his remarks.

Richard added that he believed there was “no more margin,” meaning delays with GBSD or Minuteman III sustainment failures could entirely derail a stable transition.

“I want us to recognize that you can’t indefinitely life-extend anything,” Richard cautioned.

Perhaps with these concerns in mind, the Air Force has been successfully test-firing Minuteman III ICBMs in what could be seen as an effort to ensure potential adversaries are aware that the United States has a fully capable ICBM arsenal.

Could the early arrival of the new GBSD solve this problem, should that be at all possible? While there are no specific assurances that the weapon will arrive earlier than the late 2020s, it does not seem impossible. By all reports and comments from senior Pentagon leaders, Northrop Grumman’s GBSD is on track and showing great promise. Furthermore, the program was fast-tracked to success in part through the effective use of digital engineering, a highly accurate method of using computer simulation to expedite the development and technological maturation for the weapon. GBSD has been one of several key weapons systems to specifically benefit greatly from the effective use of computer modeling and digital engineering, as advanced computer algorithms are now able to precisely replicate precise operational and technical details for the purpose of rapid, yet highly effective development.

As part of this, Northrop Grumman and Air Force developers are making a specific push to engineer the new GBSD for reliability as a way to prepare for and offset the difficulties associated with sustainment.

Senior Air Force leaders have for many years now emphasized that the new GBSD weapon needs to be engineered for reliability and growth potential, something heavily emphasized throughout the developmental process. The concept is a clear attempt to learn lessons from the Minuteman III experience and architect a new, upgradable ICBM able to operate into the 2080s. Air Force and industry developers say the new GBSD will be built for longevity, sustainment and a decades-long service life. At the same time, it is likely being built with groundbreaking levels of flight stability and performance technologies to increase the likelihood that an ICBM can successfully fly through or counter enemy countermeasures.

At the same time, in order for these attributes to take full effect, the emerging GBSD needs to arrive in time to avoid what Richard referred to as “uncharted territory” should a transition from Minuteman III to GBSD lead to an unwanted “missile gap.”

“If you want to push that further, right, you are going into uncharted territory.  We may be able to chart that territory, but there is an enormous amount of detail that has to go into that, and the only organization that I know who is capable of working through all of that detail is the United States Air Force,” Richard said.